You are here: Home / Archives for Cuba City 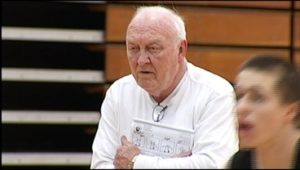 The winningest coach in Wisconsin High School Basketball history has reached another milestone.

The Cubans led 50-40 late in the game and had to hold off a rally by the Vikings which eventually tied the game 59-59.  Two free throws by Blake Robson with 10 seconds left proved to be the difference as the Cubans won in their first game of the season.

Petitgoue began his coaching career at Gratiot High School in 1963.  He became the boys basketball coach at Cuba City in 1971, winning State titles in 1981 and 1991.

Petitgoue also serves as the Executive Director of the Wisconsin Basketball Coaches Association.

AUDIO: Jerry Petitgoue reflects on his 50 years of coaching and 900 wins :17

(Thanks to Mark Evenstad at Queenbradio for contributing to this story)

The 71-year-old coaching legend is Wisconsin’s all-time winningest high school basketball coach, posting 820-wins and 200 losses in his 46 years of coaching, including the last 42 at Cuba City.