You are here: Home / Archives for Dean Lowry

The Packers will practice for four straight days before getting their first off day, on Monday, July 29.  Another four day run starts on Tuesday, July 30, capped off by the teams Family Night on August 2nd inside Lambeau Field (7:30 p.m.).

The Packers will hold joint workouts with the Houston Texans on August 5 and 6 before opening the preseason against the Texans on Thursday, August 8.

The Green Bay Packers have signed defensive lineman Dean Lowry to a three-year contract extension worth a reported $20.3 million.  The deal includes a $6 million signing bonus.

Lowry was entering the final year of his rookie deal and was set to make just over $2 million this season.

The former fourth round draft pick has played in all but one game in his three seasons with the Packers.  The former Northwestern Wildcat has made 19 starts and has missed just one game.

Green Bay Packers defensive end Muhammad Wilkerson was carted off the field and taken by ambulance to a hospital in Washington D.C. on Sunday.  Wilkerson remained there overnight into Monday because he needed a procedure that would allow him to return to Green Bay.

Wilkerson suffered a significant ankle injury and will be lost for the season.

Former Northwestern Wildcat Dean Lowry took his place and played a total of 24 snaps in the loss to the Redskins.  Lowry and Montravius Adams will continue to fill the shoes of Wilkerson, which won’t be easy.

Wilkerson came to Green Bay on a one-year deal, hoping to play well to get a bigger contract moving forward.

The Green Bay Packers stayed in the NFC playoff picture by knocking off the Tampa Bay Buccaneers 26-20 in overtime on Sunday, snapping a three-game Lambeau Field losing streak.

The Packers improved to 6-6 and will face winless Cleveland on Sunday with the potential return of quarterback Aaron Rodgers for the final three games of the regular season.

The Packers used a couple of big plays to help their cause.  Linebacker Kyler Fackrell blocked a punt that allowed the Packers to take over at the Tampa Bay 45.  Jamaal Williams later scored on a 1-yard touchdown run to give the Packers a 10-7 lead.

On the very next Tampa Bay possession, Green Bay defensive tackle Kenny Clark stripped the ball from quarterback Jameis Winston and the ball was scooped up in mid-air by Dean Lowry who returned the fumble 62 yards for a touchdown and a 17-7 Packers lead.

The Packers have struggled to get pressure on quarterbacks this season, but they made up for lost time on Sunday.  Clay Matthews returned to the lineup and recorded 2 1/2 sacks.  Kenny Clark added two sacks, the first two of his career, helping the Packers to a seven sack day.  The seven sacks was one short of the team record set against the Philadelphia Eagles in 2004. END_OF_DOCUMENT_TOKEN_TO_BE_REPLACED 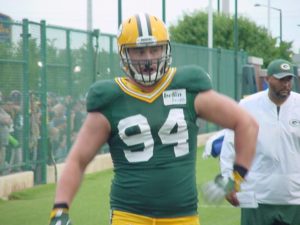 Lowry avoided a serious knee injury after he left last Saturday’s preseason game against the Washington Redskins.  Tests showed no major damage and the injury is considered to be a short-term one.

The Packers signed former University of Miami nose tackle Calvin Heurtelou, helping fill the void at the position when Letroy Guion was released this month.

Heurtelou had been out of the NFL since his release by the Denver Broncos in the cut to 75 players last year.  He had signed with Denver as an undrafted free agent in May of 2016.

The Packers return to the practice field on Tuesday.  They moved their practice time back to 3:15 this afternoon to deal with injuries and rehab from Saturday’s preseason game at Washington.

Tuesday’s workout is one of three remaining practices open to the public as training camp winds down.