You are here: Home / Archives for Dontrelle Willis

Dontrelle Willis signed with the Milwaukee Brewers in January with hopes of earning a spot in the Brewers bullpen.  He never did take the mound in a game this spring and is planning to retire.

Willis was scheduled to pitch in a game for the Brewers late last week but was scratched when he woke up with a stiff neck.

Willis won a World Series ring with the Florida Marlins in his 2003 rookie season.  He was also named the NL Rookie of the Year and appeared in a pair of All-Star games in his career. 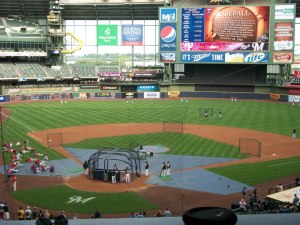 Albeit a long shot, the Milwaukee Brewers have signed left-handed pitcher Dontrelle Willis to a minor-league contract with an invitation to spring training camp.

The 33-year-old Willis has been plagued by injuries recently and hasn’t pitched in a big league game since he pitched for the Cincinnati Reds back in 2011.  He went 1-6 with a 5.00 ERA in 13 starts for the Reds that year.

Willis’ signing doesn’t mean the Brewers are done looking for left-handed options for their bullpen.