You are here: Home / Archives for Drunk driving

Police in Manitowoc County have arrested a 43-year-old woman on charges tied to a fatal crash that claimed the lives of three people. Manitowoc County Sheriff Robert Hermann says Becky Holly was picked up on an arrest warrant Wednesday, after she was released from the hospital.

Holly is accused of being drunk behind the wheel of a van on October 13th, when she allegedly lost control of the vehicle and crashed into three people in the town of Kossuth who were watching a roofing project.

Holly appeared in court Wednesday, with bail set as a $100,000 personal recognizance bond. She was also placed on electronic monitoring and ordered not to drink or drive.

She faces eight felony charges, including three counts of homicide by intoxicated use of a vehicle. Holly is due back in court for a preliminary hearing on November 28th.

Janesville Police Chief Dave Moore says the number of chronic drunk drivers in Rock County is staggering, with over 1,000 offenders that have four or more convictions. In Janesville alone, there are 391 people with more than four convictions for OWI.

Moore says a new website recently launched by the city may convince many violators to behave more responsibly. It features an interactive map that will list the mug shots, names, and addresses of those convicted of five or more OWI offenses. END_OF_DOCUMENT_TOKEN_TO_BE_REPLACED

In light of the tougher OWI laws in Wisconsin, parents might want to be more careful when attending holiday gatherings with children along for the ride. Aside from criminalizing fourth offense drunk driving, new laws that took effect earlier this year also make first offense OWI a crime if a child under the age of 16 is in the vehicle. END_OF_DOCUMENT_TOKEN_TO_BE_REPLACED 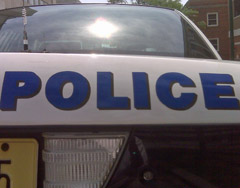 Wisconsin’s new drunk driving law is now in effect, with tougher penalties and an effort to get problem drinkers into treatment. State Senator Jim Sullivan, one of the principal authors, of Wisconsin Act 100, said the law represents a comprehensive approach to keeping the state’s roads safer. “We want to make sure that we’re focusing not just on getting your repeat drunk driver off the road, but getting your first or second time drunk driver, which is the majority of offenders, into treatment to address some of those alcoholism and addiction issues,” said Sullivan. END_OF_DOCUMENT_TOKEN_TO_BE_REPLACED

An Appleton man faces his tenth drunk driving offense after an arrest this week.

Martin refused a field sobriety test and had to be restrained by four officers while blood was being drawn. He’s in jail on several charges, including driving with a revoked license and fleeing police.

Governor Jim Doyle and the Tavern League don’t always get along, but they did Friday, in an effort to combat drunk driving in Wisconsin. The Wisconsin Tavern League’s Safe-Ride program is getting additional money, under a law signed by Doyle. “We expect about a thirty percent increase in funding for our Safe Ride programs throughout the state,” said League lobbyist Scott Stenger. “It’s going to be a significant shot in the arm, one more tool to combat drunk driving.” END_OF_DOCUMENT_TOKEN_TO_BE_REPLACED

Are Wisconsin laws dealing with intoxicated operation of boats, ATVs and snowmobiles too complicated? That’s what lawmakers are hearing at the Capitol. “Right now . . . it’s confusing, I could not believe it,” said Randy Hardin of Sheboygan, chair of the Governor’s State Trails Council. “It was almost what phase the moon was in, to figure out what ticket to write. That’s how complex it seems.” Hardin served on a task force which was charged with bringing some consistency to the current regulations. END_OF_DOCUMENT_TOKEN_TO_BE_REPLACED

The measure (SB 303) requires that blood be drawn when a driver causes death or serious injury in a crash – whether or not there is probable cause to suspect the driver has been drinking. Tim’s law is named for Tim McKee, killed in November of 2008 by a suspected drunk driver in Washington County. His family was in the Assembly for Thursday’s vote. END_OF_DOCUMENT_TOKEN_TO_BE_REPLACED 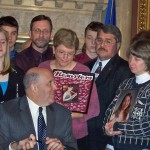 Governor Jim Doyle has signed Wisconsin’s new, tougher drunk driving bill. It criminalizes first time drunk driving when kids are in the vehicle, makes some fourth time drunk driving offenses a felony, allows use of ignition interlock devices for repeat offenders, and includes significant increases in fines. But Doyle concedes it’s not the last word. “It’s not everything I wanted, and I think if we went around this room, we could all say there were things we wanted in this bill that are not there,” said Doyle. “But it is a good bill.” END_OF_DOCUMENT_TOKEN_TO_BE_REPLACED

Drunk drivers in Wisconsin will face tougher penalties, under legislation Governor Doyle is expected to sign into law later today.  The Governor is scheduled to sign legislation this morning at a Capitol ceremony that would make 4th offense OWI a felony, along with other increased penalties and expanded treatment options. END_OF_DOCUMENT_TOKEN_TO_BE_REPLACED