You are here: Home / Archives for Election 2010

After weeks of speculation, the Majority Leader of the state Assembly announced Tuesday that he’s running for Lieutenant Governor.

State Representative Tom Nelson (D-Kaukauna) says he’s been weighing the decision for some time, but made up his mind based on promises from presumed Democratic gubernatorial nominee Tom Barrett that the Lt. Governor will have an active role in his administration. END_OF_DOCUMENT_TOKEN_TO_BE_REPLACED 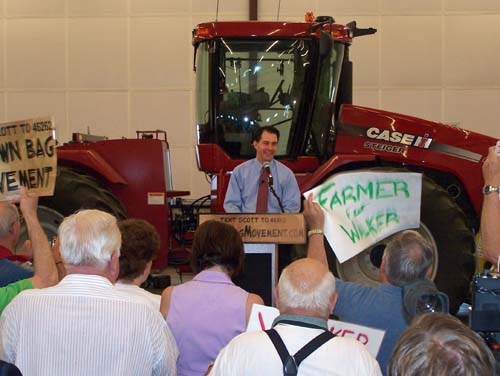 With the endorsement of the Republican Party in hand, gubernatorial candidate Scott Walker hit the campaign trail again on Monday.

In stops across Wisconsin, the Milwaukee County Executive said he’s ready to take back state government and put it back on the side of the people, in order create more jobs. END_OF_DOCUMENT_TOKEN_TO_BE_REPLACED 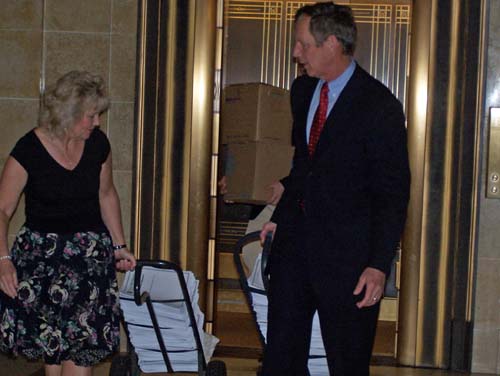 The former Congressman Neumann delivered more than 25,000 petition signatures to Governor Doyle’s office on Monday, calling for action to prevent federal health care reforms from taking effect in Wisconsin. As a small business owner, Neumann says he fully understands the impact of “Obamacare” and how it will drive businesses and jobs out of the state. END_OF_DOCUMENT_TOKEN_TO_BE_REPLACED 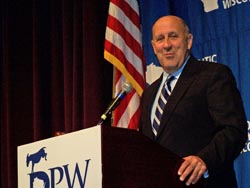 Governor Doyle at the 2009 DPW convention.

It will be a change for him, but Governor Jim Doyle says he’s actually looking forward to not having his name on the ballot next November.

Doyle has been a candidate for a statewide office since winning the Attorney General’s office in 1990, but he’ll step down at the end of next year after announcing in August he would not seek a third term in the Governor’s office. END_OF_DOCUMENT_TOKEN_TO_BE_REPLACED 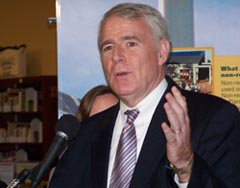 Appearing in Madison Monday, Mayor Barrett said he was surprised by Lt. Governor Barbara Lawton dropping out of the race. Still, he’s made no decision yet on whether he’ll seek the Democratic nomination in 2010. Barrett says it takes time to sort things out, but he understands that “time is of the essence” and he’ll be making a decision in the near future. END_OF_DOCUMENT_TOKEN_TO_BE_REPLACED

As the field of Democratic candidates begins to shape up, don’t expect to see Assembly Speaker Mike Sheridan among the names.

Sheridan says it’s unlikely he’ll jump into the campaign, although he admits he has considered the option. However, he wants to stay right where he’s at in the Assembly.

Governor Jim Doyle announced last week he would not seek a third term, which has many Democrats considering a run for the nomination.

Sheridan says he’s not officially out of the race though. He says a final decision will come after he’s had a chance to sit down with the candidates who come forward and officially declare. The Speaker says he wants to make sure they’re focused on protection existing jobs and to create new ones, along with their willingness to work with the Legislature.

So far, Lt. Governor Barbara Lawton is the only declared Democratic candidate.

The head of the Republican Party of Wisconsin has some doubts about Governor Doyle’s reasons for not running for a third term in office. RPW Chairman Reince Priebus says there are plenty of reasons for the Governor to get out now, such as his low approval rating, the budget mess, and the use of one time federal funding that will have to be replaced in the next budget. With those in mind, Priebus finds it very unlikely that Doyle would says he’s not running because he thinks governors should only serve two terms in office. Priebus says that explanation is a sham, since Doyle has continued to raise campaign funds throughout his current term in office. Priebus says Republicans were looking forward to running against Doyle. However, he says they’ll also enjoy competing for an open seat.

Democrats like their chances of holding on the Governor’s mansion.

Governor Doyle’s decision not to seek re-election means the field is wide open, and Democratic Party of Wisconsin Chairman Mike Tate expects to see many qualified candidates step forward in the coming weeks.

Lt. Governor Barbara Lawton is the only Democrat to indicate she will run for the nomination, although Tate says many others are weighing their options. Aside from Lawton, other possible Democratic candidates include Congressman Ron Kind and state Senator Jon Erpenbach (D-Waunakee).

As candidates enter the race, they’ll be playing catching up with a Republican headstart on fundraising. Tate says their candidates will have plenty of time to raise money, with only the winner of the Democratic primary having to match what the GOP candidates has been able to raise.