You are here: Home / Archives for Fond du Lac 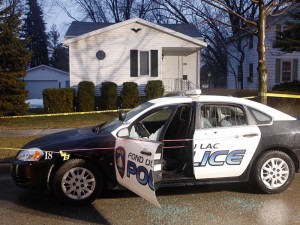 For members of the Fond du Lac Police Department, there’s another hurdle in getting over the pain of losing an officer in a standoff incident last March. The state Department of Justice has released photos, videos, and records from the investigation into the fatal shooting of Office Craig Birkholz.

Many redactions were made to what the DOJ released online about the shooting that killed Birkholz, critically wounded another officer, and led to the shooter taking his own life. Still, Police Captain Steve Klein says it is a reminder of Officer Birkholz’s sacrifice and the efforts of others that day. END_OF_DOCUMENT_TOKEN_TO_BE_REPLACED 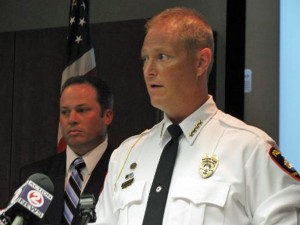 A volatile relationship and events that transpired in the days leading up to a standoff with police contributed to the fatal shooting of a Fond du Lac Police officer. That’s according to the findings of an investigation into the March 20th incident, which was released Monday by Fond du Lac County District Attorney Dan Kaminsky.

A morale booster for Fond du Lac Police, as Officer Ryan Williams is being released from the Theda Clark Medical Center in Neenah today. Williams was shot twice in the chest last Sunday while responding to a sexual assault complaint. Fellow officer Craig Birkholz was killed in the same incident, during which the shooter took his own life.

Fond du Lac Police Captain Steve Klein says they’re happy to hear Williams is being released and it’s really lifting up the spirits of everyone at the Department. END_OF_DOCUMENT_TOKEN_TO_BE_REPLACED 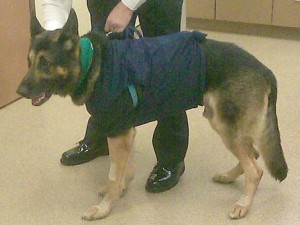 A police dog with the Fond du Lac Police Department is recovering from a gunshot would received during Sunday’s shooting, which also claimed the life of one officer and left another wounded.  K-9 Grendel is Officer Ryan Williams’ partner. He’s currently at the Fox Valley Animal Referral Center in Grand Chute. END_OF_DOCUMENT_TOKEN_TO_BE_REPLACED

More than 150 squad cars from across southern Wisconsin waited on the south end of Fond du Lac Wednesday to join up with those escorting the body of Officer Craig Birkholz back to him hometown of Kenosha for a memorial service. As they moved across the city, people lined the streets holding American flags and snapped photos in the sleet.

Birkholz was killed Sunday as police were responding to a sexual assault call. He served in the Army in Iraq and Afghanistan and had been with Fond du Lac Police for nearly two years. Another officer and a K-9 unit were also shot. Both are still recovering. END_OF_DOCUMENT_TOKEN_TO_BE_REPLACED

The son of a a Town of Byron man killed by a tractor could end up facing criminal charges in the death. Fond du Lac County District Attorney Dan Kaminsky says that’s after a jury at an inquest this week ruled their was probable cause that 26-year-old Michael Batterman committed second degree reckless homicide or homicide by negligent use of a motor vehicle. END_OF_DOCUMENT_TOKEN_TO_BE_REPLACED

A Fond du Lac firefighter is on administrative leave without pay, after officials say he showed up to work while intoxicated.

FDL Fire Chief Peter O’Leary says the firefighter was tested and relieved of duty after showing up to his station. He was not sent out on any calls and O’Leary says the public and other firefighters were not put at any risk. END_OF_DOCUMENT_TOKEN_TO_BE_REPLACED

For the second time in recent months someone left white supremacist fliers on cars at the Horace Mann High School in North Fond du Lac. Police Captain Darren Pautsch says while leaving the fliers on the cars isn’t illegal, the sentiment expressed in the fliers promotes violence; something authorities are concerned about. “Anyone who wants to disseminate propaganda that promotes violence, especially in and around a school, is someone that we want to know who they are, and what it is they’re up to,” Pautsch says. END_OF_DOCUMENT_TOKEN_TO_BE_REPLACED 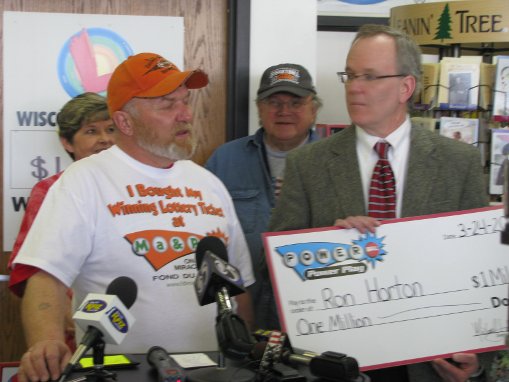 Ron Horton of Fond du Lac says nobody at first believed he’d become the state lottery’s newest millionaire at first. Horton, who works as a supervisor at Sadoff Iron & Metal in Fond du Lac, says he has a reputation for joshing others.

A Fond du Lac toddler survived being struck and dragged by an elderly driver Wednesday, an incident police say is likely to raise debate about testing of older drivers.

Two year-old Erin Konen was dragged about 70 feet after an 88-year-old woman struck her and her mother Heather in a downtown crosswalk Wednesday morning. Erin is in fair condition at Children’s Hospital in Milwaukee, while her mom suffered only minor injuries. Police Captain Steve Klein says driver Helen Immel apparently didn’t realize she’d hit anyone. Immel was cited for failing to yield the right of way causing injury and inattentive driving. Klein says if a driver’s ability to drive is hindered by medical or physical conditions, officers can send a report to the State’s Department of Transportation asking for a review.