You are here: Home / Archives for Fox Cities Stadium

“Each club is different as you know, but overall, we are in need of some help,” said O’Conner.  “We’ve END_OF_DOCUMENT_TOKEN_TO_BE_REPLACED

Stearns told reporters in a Zoom webinar that their biggest challenge will be to keep the players safe and healthy. END_OF_DOCUMENT_TOKEN_TO_BE_REPLACED

Champions were crowned in four divisions at the WIAA State baseball championships at Fox Cities Stadium on Thursday.

For the second straight season, Wisconsin will not have any representation in the NCAA Division-3 College World Series.

The 2018 D-3 CWS starts Friday morning at Fox Cities Stadium in Grand Chute.  It’s the 19th and final season for the event in the Fox Cities.

UW-Whitewater’s season came to an end as the Warhawks fell 6-3 to Rhodes (Tennessee) early Sunday and were then beaten 4-1 by Texas-Tyler to be eliminated in the Central Regional in Sauget, Illinois.  The Warhawks had already beaten Texas-Tyler 8-2 on Saturday.

The Warhawks finished the season with a 33-8 record, claiming the schools 5th WIAC regular season title with a 20-4 record.

In Duluth, Minnesota, UW-Oshkosh had two games to win just once, but fell to Concordia-Chicago 7-1 and 3-2, to fall short of the Duluth Regional title.

For the 12th straight season, the Wisconsin Intercollegiate Athletic Conference (WIAC) will be represented by multiple teams in the NCAA Division III Baseball Championship after University of Wisconsin-Oshkosh and UW-Whitewater received bids into this year’s championship.

The teams earned two of the 18 at-large spots into the 58-team field.  UW-Oshkosh (31-8) will compete in a regional hosted by College of St. Scholastica in Duluth, Minnesota.  The Titans, who are making their league-leading 25th NCAA appearance, and first since 2008, will open against Bethel University (Minn.) (32-9).  Oshkosh won national titles in 1985 and 1994.

UW-Whitewater (31-6) is making its 11th straight appearance and 21st overall with national championships in 2005 and 2014.  The Warhawks will participate in a regional hosted by the St. Louis Intercollegiate Athletic Conference in Sauget, Illinois.  The Warhawks will face Monmouth College (Illinois) (28-12-2) in their first game.

Both regionals follow a double-elimination format and begin on May 17.  Winners of the eight regional tournaments will qualify for the NCAA D-3 Championship at Fox Cities Stadium in Appleton, May 25-30.

The 2018 Championships mark the final season that the event will be held at Fox Cities Stadium.

The WIAA‘s Board of Control ratified an agreement with the Appleton Baseball Club, Inc., that extends the use of Neuroscience Group Field at Fox Cities Stadium for the State Spring Baseball Tournament through 2028.

The extension will give Fox Cities Stadium the distinction of hosting State spring baseball for the greatest length of time since the tournament’s inception in 1948.  Wausau hosted the tournament for 25 years from 1973-1997.

Outfielder Drew Lechnir went 2 for 3 and drove in three of the four runs scored by the Papermakers.

The Papermakers (23-8) were making their fourth straight championship game appearance, this time pulling out a win. 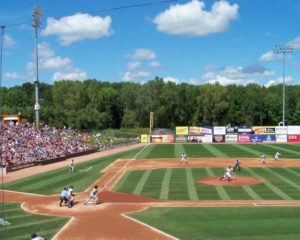 Another late night for the WIAA State Spring Baseball Tournament at Fox Cities Stadium.  Rain forced delays, but all six scheduled games were played, setting up the four championship games on Thursday.