You are here: Home / Archives for Jamil Wilson

Travis Diener hit the game-winning three-pointer to lead the Golden Eagles to their first TBT title.  It comes after Marquette lost in the title game a year ago.

Tuesday’s championship game concluded the 24-team event that began July 4, making TBT the first nationally-televised basketball tournament to be completed in the United States since the start of the COVID-19 pandemic.

Jamil Wilson scored 25 points and pulled down 10 rebounds to lead Marquette to a 77-66 win over Seton Hall on Tuesday night.

Marquette is still holding out hopes of finding a spot in the NCAA Tournament.  They’ll need to finish the regular season strong and have a good showing in the Big East Tournament to have a chance.

The Golden Eagles (8-6) were the preseason pick to win the reshaped Big East Conference, but they struggled last night against the Blue Jays (11-2) and have the league’s worst overall record.

Creighton tied a school record with 35 three-point attempts, making 13 of them, as they jumped out to an early lead and never trailed.

Marquette got 10 points apiece from Jamil Wilson and Chris Otule but shot just 38% from the field.  They also turned it over 15 times in the loss.

The game was played before 18,525 fans at the CenturyLink Center.  That’s the 3rd largest crowd ever to watch a Creighton men’s basketball game.

Marquette returns to Milwaukee to play host to DePaul on Saturday afternoon (1:00pm) at the BMO Harris Bradley Center.

The Marquette Golden Eagles built an early double-digit lead and never looked back as they topped Miami 71-61 in the East Regional Semifinals of the NCAA Men’s Basketball tournament Thursday night in Washington D.C.  After leading 29-16 at the half, the closest the game ever got was ten, the final margin.

Jamil Wilson had 16-points to lead the Golden Eagles.  Vander Blue and Davante Gardener added 14-each while Trent Lockett chipped in with 8-points and 11-boards.  After the game, Head Coach Buzz Williams was proud of his team’s effort…

END_OF_DOCUMENT_TOKEN_TO_BE_REPLACED

The Marquette Golden Eagles came from six points down with 70 seconds left to play to beat the Davidson Wildcats 59-58 in their NCAA men’s basketball tournament opener in Lexington, Kentucky.

Davidson led by one in the final seconds and turned the ball over.  Marquette inbounded with 6.7 seconds left, got the ball to Vander Blue, who drove and scored the game winning basket with 1 second left to play and sent the Golden Eagles on to victory.

Marquette (24-8) moves on to face sixth-seeded Butler on Saturday in a rematch that saw them lose to the Bulldogs back in November in Maui.

Marquette struggled from beyond the arc, 1 for its first 12.  Then, when the Golden Eagles needed it most, Jamil Wilson made a three-point shot with a minute to play.  Vander Blue hit another with 27.8 seconds left and Wilson made yet another, with 10.9 seconds left to play.

The Marquette Golden Eagles dropped from the Big East Conference lead with a 63-55 loss to the Georgetown Hoyas on Monday night.

Marquette is now tied for second place in the Big East with the Hoyas.

It was a struggle for the Golden Eagles last night.  Buzz Williams saw his team turn it over 19 times on the night.

Jamil Wilson had 13 points to lead Marquette.  The Golden Eagles will try to quickly put this one behind them.  They’ll host Pittsburgh on Saturday at the BMO Harris Bradley Center.

25th ranked Marquette is off to a perfect 4-0 start in Big East play, following their 69 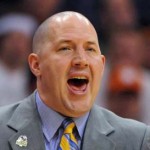 The Pirates came to Milwaukee with only 8 healthy players and lost two of them to foul disqualification during the game.

The Golden Eagles were so-so in the rebound department, they didn’t shoot lights out.  Coach Buzz Williams said his team isn’t really good at any 1 thing.

AUDIO: Jamil Wilson on not being able to put the Pirates away :14

Marquette hits the road to face the Bearcats in Cincinnati on Saturday.

Jamil Wilson scored 15-points and Davante Gardner added 14 to lead the Marquette Golden Eagles to a 84-63 win over Colgate in the opening game of the Maui Invitational on Sunday.

It was Marquette’s season opener after its game against No. 4 Ohio State aboard the USS Yorktown in South Carolina was canceled Friday night due to condensation on the floor.

The Golden Eagles led 42-31 at the half and never trailed in the contest.

The 18th ranked Marquette Golden Eagles got 23 points from Darius Johnson-Odom and knocked off the DePaul Blue Demons 89-76 in Big East action.

The Golden Eagles used a 16-3 run to open the second half to pull away.

Cleveland Melvin had 22 to lead DePaul, but the Blue Demons have now dropped 36 straight games against ranked opponents dating back to January of 2008.

The Golden Eagles are off until Saturday when they host Cincinnati.