You are here: Home / Archives for Jared Abbrederis 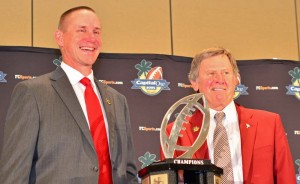 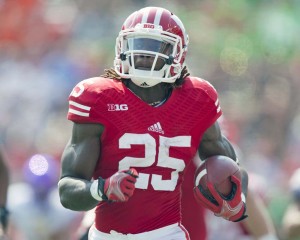 and Badger coach Gary Anderson said there’s no doubt that Abbrederis will be ready to play Saturday night when the Badgers face Illinois in Champaign.

Stave said he felt pretty good running around and had no lingering effects from the concussion he suffered in Saturday’s 35-6 win over Northwestern at Camp Randall Stadium.

AUDIO: Coach Gary Anderson said the rest of the receivers came to play :21

Abbrederis leads the Badgers in receiving.  He’s second in the Big Ten in receiving yards, averaging 107.7 yards per contest.

Illinois will not only have Abbrederis to contend with, they have struggled to stop the run.  The Illini currently ranks 11th in the Big Ten, allowing 195.4 yards per game.  They gave up 335 yards rushing to Nebraska earlier this month.

Several members of the Wisconsin football team are scheduled to participate in “Shave to Save” on Thursday at noon in the Wisconsin locker room.

The purpose for the event is to raise awareness for childhood cancer research at American Family Children’s Hospital.

Jared Abbrederis, Jacob Pederson and Ryan Groy are among the players set to have their heads shaved.

Patients from the American Family Children’s Hospital will do the honor of shaving the players heads.

The Ohio State Buckeyes won their 17th straight game on Saturday night, knocking off the Wisconsin Badgers 31-24 in Columbus.

The three-time defending Big Ten Champion Badgers had little answer for the Buckeyes speed, but they didn’t give up.  Several times the Badgers would claw themselves back in it, only to shoot themselves in the foot with costly penalties.

The Badgers had a number of break-downs in their secondary, but none bigger than Braxton Miller getting a pass over the top of the Badger secondary for a 40-year touchdown pass to Devin Smith, who was left open by a busted coverage.

AUDIO: Gary Anderson on his message to the team at halftime :22

The Badgers had key penalties in the first half that wiped out what appeared to be Ohio State fumbles.  They were also called for an illegal formation on a punt, which negated a fumble recovery at the OSU 2-yard line. END_OF_DOCUMENT_TOKEN_TO_BE_REPLACED

The Badgers have only one lock at wide receiver, senior wide receiver Jared Abbrederis.  Jeff Duckworth and Jordan Fredrick both have experience, but playing time after Abbrederis appears to be up in the air. END_OF_DOCUMENT_TOKEN_TO_BE_REPLACED

Wisconsin would get one final chance, trailing 20-14 with 4:23 left.  Wisconsin moved from its 25 to the Stanford 49, but Phillips had a pass attempt tipped at the line of scrimmage and land in the hands of Stanford defensive back Usua Amanam and that would end the Badger threat. END_OF_DOCUMENT_TOKEN_TO_BE_REPLACED