You are here: Home / Archives for Jerryd Bayless

The Milwaukee Bucks landed a big man who can shoot in free agency on Friday, agreeing to a 3-year, $30 million deal with Mirza Teletovic.

Teletovic averaged 12.2 points and 3.8 rebounds in a reserve role with the Phoenix Suns last season, shooting a career best 39.3% from three-point range.

Teletovic is re-united with head coach Jason Kidd after playing for Kidd in Brooklyn.  Teletovic played for the Nets during his first three NBA seasons.

Multiple reports also say the Bucks have signed Cleveland free agent guard Matthew Dellavedova to an offer sheet, one that the Cavaliers will have until July 10th to match.  The Milwaukee Journal Sentinel reports that it’s unlikely the Cavaliers will match that offer.

The Bucks also lost guard Jerryd Bayless after he agreed to a three-year, $27 million deal with the Philadelphia 76ers.  Bayless ranked fourth in the league in three-point shooting last season, averaging 43.7% from distance. 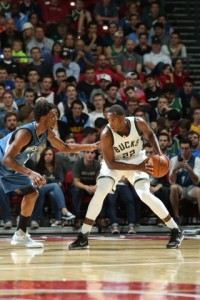 The Milwaukee Bucks led most of the way last night, but Andrew Drummond’s tip-in with two-seconds left gave the Detroit Pistons a 92-91 victory at the Palace of Auburn Hills.

Bucks guard Jerryd Bayless missed a pair of free throws with 9.6 seconds left and the Bucks up 91-90.  Kentavious Caldwell-Pope missed a three-pointer, but Drummond tipped in the miss.

Detroit (37-34) entered the game tied with Chicago for the eighth and final playoff spot and a half-game behind Indiana for the seventh spot in the East.

Khris Middleton scored a game-high 27 points and Giannis Antetokounmpo had 21 points and 12 rebounds.  Greg Monroe had 18 points and 10 rebounds for the Bucks.

The Bucks coughed up leads of 17 and 13 points during the loss.  They have 11-games left in the NBA regular season.

For the second game in a row, a late Milwaukee rally fizzled as the Chicago Bulls pulled out a 100-90 win over the Bucks at the United Center in Chicago.

The Bucks played from behind most of the night and trailed by four with 2 1/2 minutes left when former Buck Mike Dunleavy hit a three-pointer that helped seal the deal for Chicago.  Dunleavy scored a season-high 18 points and his teammate Pau Gasol had a triple-double with 12 points, 17 rebounds and 13 assists.

The Bucks shot just under 40-percent for the second straight game.  Jerryd Bayless led the way with 20 points.

Milwaukee has lost two straight and five of its last seven, while the Bulls ended 16 straight games of giving up 100 points or more. 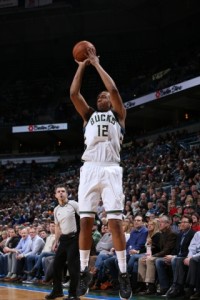 The young Milwaukee Bucks have struggled with consistency this season.  When things have been good, they’ve been really good.  But maintaining consistency has been a struggle.

Last night was one of those special nights for the Bucks.  Jabari Parker poured in a career high 36-points, Khris Middleton added 30-points and Giannis Antetokounmpo added his second triple-double in four games with 18 points, 17 rebounds and eleven assists, helping the Bucks beat the Houston Rockets 128-121 at the BMO Harris Bradley Center.

Middleton’s 30-point night included a 15-for-15 performance at the free throw line.  Jerryd Bayless came off the bench and added 18 points, going five-for-eight from three-point range.

The Bucks build a 125-112 lead with 2:27 left to play.  Houston went on a 9-to-nothing run to cut the Bucks lead to four before they found the answer and finished strong.

The Bucks return to action Wednesday night when they host the Indiana Pacers in game three of their five game home stand.

The Milwaukee Bucks held Miami to a season-low 36.5% shooting from the field and beat the Heat 91-79 in Miami on Tuesday night.

Because of injuries, the Heat was down to its third point guard and second-year pro Tyler Johnson struggled against the constant pressure of Bucks point guard Michael Carter-Williams.

The schedule makers haven’t been kind to the Heat.  They returned home from a six-game road trip for the one game against the Bucks.  Now they head out on a five-game road trip.

The Bucks are off to a 2-0 start on their four-game road trip.  They got 22 points, seven rebounds and seven END_OF_DOCUMENT_TOKEN_TO_BE_REPLACED 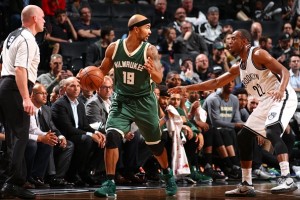 The Milwaukee Bucks were held to 33% shooting from the field and made just 3 of 13 three-point field goals, falling to the San Antonio Spurs 95-70.  The 70-point total is a season low for the Bucks.

After the Bucks climbed to within 50-44 early in the third quarter, the Spurs went on a 15-to-one run and the Bucks never challenged from there.

The Spurs outscored the Bucks 28-17 in the third quarter and it became a game for the reserves in the fourth quarter.

The Bucks guards combined to shoot seven for 32 from the field.

Tim Duncan had 16 points and ten rebounds for the Spurs (15-4) who have won 19 straight home games.  The Bucks haven’t won in San Antonio dating back to 2008.

With coach Jason Kidd serving his one game suspension handed down by the NBA on Friday, his Milwaukee Bucks fell to the Orlando Magic 114-90 in Orlando.

Up 49-43 at halftime, the Magic came out in the third quarter and shot 81% from the floor, hitting all six of its three pointers and putting 37 points on the scoreboard.  The Magic went on to shoot 52% from the field for the game.

Milwaukee (6-10) lost for the fifth time in their last six games.  They got 17 points each from Giannis Antetokounmpo and Jerryd Bayless.  Khris Middleton added 15.

The Bucks practice today and play at Charlotte on Sunday afternoon.

The Milwaukee Bucks, who lost by 37 points at Indiana on Saturday, put an end to their three-game losing streak, upending the Detroit Pistons 109-88 at the BMO Harris Bradley Center on Monday night.

Greg Monroe scored 20 points and pulled down 13 rebounds for the Bucks.  He also held Pistons center Andre Drummond scoreless in the third quarter as the Bucks were up 88-62 entering the fourth quarter.

A total of seven players scored in double figures for the Bucks (6-8).  Giannis Antetokounmpo  added 17 points, Khris Middleton had 16, Jerryd Bayless 14, Jabari Parker and Michael Carter Williams with 12 each and Greivis Vasquez finished with ten.

Defensively, the Bucks held Detroit to 34% shooting from the field and 6 of 28 from three-point range.

The Bucks return to action on Wednesday night against Sacramento at the Bradley Center.