It’s only 1-game, but Jim Boylan has a victory in his first game as the interim head 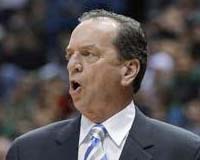 coach of the Milwaukee Bucks.

Brandon Jennings poured in 29 points to lead the Bucks to a 108-99 victory over the sinking Phoenix Suns.

Boylan also had a head coaching stint with the Chicago Bulls.  He said he was probably too worried about trying to keep the job back then.

AUDIO: Jim Boylan on winning his first game with the Bucks :13

The Bucks put an end to their 4-game losing streak with the victory. END_OF_DOCUMENT_TOKEN_TO_BE_REPLACED

Scott Skiles is out as the coach of the Milwaukee Bucks after four-plus seasons.  The

decision was mutually agreed upon by both parties and Skiles, which means Skiles is done with a record of 162 and 182 in four-plus seasons.

Jim Boylan will take over as interim coach of the team beginning with tonight’s game against Phoenix.

Skiles final game as coach came Saturday night when the Bucks lost to the Pacers in Indianapolis, a 95-80 defeat.  It was the fourth straight loss for the Bucks, who dropped back to .500 at 16-16.

Skiles led the Bucks to one playoff appearance in four seasons.  That came in the 2009-10 season when the Bucks went 46-36, the only time Skiles had a winning season.

Skiles was in the final year of his contract with the Bucks.