You are here: Home / Archives for Johnny Hellweg

Chase Headley’s solo home run in the 12th inning gave the San Diego Padres a 2-1 win over the Milwaukee Brewers on Wednesday night at Miller Park.

Headley’s game winner came off of Alfredo Figaro, who was working on his third inning of relief.  It ended a 4-game Brewers winning streak and dropped Milwaukee’s home record to 6-5.  They’re 9-1 on the road this season.

Brewers starter Yovani Gallardo turned in a solid effort on the mound, working seven innings and allowing one run on five hits.  He walked two and struck out four.  Even though Gallardo didn’t get a decision, he improved to 5 for 5 in quality starts.  The Brewers as a team have 16 quality starts in 21 games.

The Brewers only run came off Scooter Gennett’s solo home run, his first of the year.

Brewers pitching prospect Johnny Hellweg faces the possibility of undergoing Tommy John surgery after suffering an injury in his last outing for Triple (A) Nashville.

Hellweg is the 4th ranked prospect in the Brewers farm system by Baseball America.

The Milwaukee Brewers scored four runs in the second inning and knocked off the New York Mets 4-2 in their series opener at Citi Field in New York last night.

Rookie Johnny Hellweg made his 7th start of the season.  He had to be removed after four innings because of control issues.  Hellweg only allowed two hits and one run but walked four batters, hit two more and tossed a wild pitch for good measure.

The Mets had several chances to put more runs on the board, but went 0 for 14 with runners in scoring position.

Hellweg won the Pacific Coast League Pitcher of the Year honors, but his success in the minors didn’t translate to the majors.  At this point, it would be difficult for the Brewers to pencil Hellweg into the mix for a spot in the 2014 starting rotation.

The Milwaukee Brewers have announced their 2013 Robin Yount Performance Award winners, which go to the top player and pitcher in their minor league system.

Johnny Helweg is the organization’s top pitcher and first baseman Jason Rogers is the top player.

Hellweg, who was acquired from the Angels in the Zach Greinke trade, made his debut with the Brewers earlier, going 0-3 with a 10.97 ERA in four games.  Hellweg just rejoined the Brewers as a September call-up.

The 25-year-old Rogers played the entire season at Double-A Huntsville, batting .270 with 22 homers and 87 RBIs in 133 games.  He led the Southern League in RBI’s and ranked among the league leaders in home runs.

Hellweg becomes the fourth pitcher in the Sounds’ 36-year franchise history to capture his league’s Pitcher of the Year honor.

The Milwaukee Brewers prospect has gone 10-1 in his last 15 starts.

Hellweg joined the Brewers organization after spending four years in the Angels system.  He was acquired from Los Angeles last July in the Zach Greinke deal.

After a 0-3 record and 10.97 ERA in Milwaukee, the Brewers sent Hellweg to the Fox 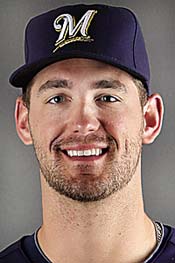 Cities and he bounced back with a solid 6-inning performance with the Class A Wisconsin Timber Rattlers.

Hellweg worked 6-innings, allowed 2-runs on 6-hits with 4-strikeouts in the Timber Rattlers 6-2 win over Lake County on Sunday.

Hellweg will now get a few days off with the all-star break to spend time with family before his next assignment.  That could mean a return to Milwaukee, or it could mean more appearances at one of the Brewers farm clubs.

The much anticipated debut of Brewers pitcher Johnny Hellweg has not gone the way anyone would have hoped.  Making his third start for Milwaukee Wednesday, Hellweg was roughed up again as the Brewers fell to Cincinnati 6-2.

Hellweg lasted 4 1/3 innings allowing 4-runs on 4-hits while walking 5 as he fell to 0-3 for the season.  After his three starts with the Brewers, Hellweg’s ERA sits just under 11.  Because of his struggles, the team optioned him to the minors after Wednesday’s game…

END_OF_DOCUMENT_TOKEN_TO_BE_REPLACED

Heading into Tuesday’s game with the Cincinnati Reds, Milwaukee Brewer starting pitchers were in a 407-game stretch without a complete game.  Yovani Gallardo was the last to toss all 9-innings back on April 5th of 2011.

Wily Peralta put a stop to that run as the Brewers blanked the Reds 2-0 at Miller Park.  Peralta tossed a 3-hit shutout while striking out 6 and walking 4.

END_OF_DOCUMENT_TOKEN_TO_BE_REPLACED

In past years when the Milwaukee Brewers were going through struggles, the Pittsburgh Pirates were usually just what the doctor ordered.  That may not be the case this time around.

Milwaukee opens a 3-game weekend series with the Pirates tonight at PNC Park.  Pittsburgh has rattled off 6-straight victories and sits at 48-30 on the season.  They are tied with St. Louis for first in the NL Central and for the best record in baseball.  Milwaukee’s loss to Chicago Thursday sent them back to the cellar in the NL Central with a 32-45 mark.

Johnny Hellweg will make is Major League debut tonight for the Brewers.  He replaced Alfredo Figaro in the rotation when Figaro was placed on the DL with an oblique strain.  Hellweg was part of the Zack Greinke deal with the Angels at last year’s trade deadline.  So far in 2013, Hellweg was 7-4 with a 2.82 ERA at Triple-A Nashville.

Many things can be brought up when it comes to figuring out what has gone wrong so far in 2013 for the Milwaukee Brewers.  Though injuries can sometimes be an excuse, the fact of the matter is Milwaukee has been hurt in that department.

Tuesday, the Brewers had to put another player on the 15-DL as starting pitcher Alfredo Figora has an oblique injury.  Starter Johnny Hellweg was called up from Triple-A Nashville to give Milwaukee another starting arm.  Manager Ron Roenicke talks about the injury…

AUDIO: Ron Roenicke on Figaro to the DL :14 END_OF_DOCUMENT_TOKEN_TO_BE_REPLACED