You are here: Home / Archives for Josh Jones

Green Bay Packers safety Josh Jones reported to minicamp on Tuesday but stood on the sidelines and watch because of a hamstring injury.

Jones had been a no-show during the rest of the teams offseason program, including OTA’s.  Those sessions were voluntary.  Jones said he spent the last several weeks training in Florida, which is where he injured his hamstring.

Instead of working out with his teammates, Jones said he prefers working with his trainer in Florida, and he wanted to spend more time with family, especially his young daughter.

Gutekunst met with reporters following Tuesday’s workout and left the door to a trade open. END_OF_DOCUMENT_TOKEN_TO_BE_REPLACED

The Green Bay Packers racked up 521 yards of offense, never punted and allowed just 264 yards, yet still lost 31-23 to the Detroit Lions at Ford Field on Sunday.

The Packers dug themselves a hole, training 24-0 at halftime and they didn’t get any help from their kicker.  Mason Crosby missed five kicks, four field goals and one extra point in the loss.  He had field goal misses from 41, 42, 38 and 56 yards, capping off the worst kicking day of his career.

The Packers struggled on special teams aside from Crosby’s misses.  On the Lions first punt, Kevin King had the ball go off his back and Detroit recovered on the one-yard line, setting up the first of two LeGarrette Blount 1-yard touchdown runs.

On the next kickoff, Ty Montgomery returned the ball 64 yards, only to have that called back when Josh Jones was flagged for holding on the opposite side of the field. END_OF_DOCUMENT_TOKEN_TO_BE_REPLACED 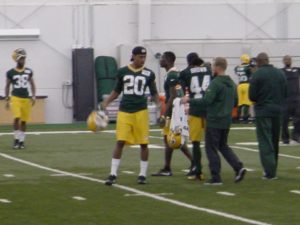