You are here: Home / Archives for Josiah DeGuara 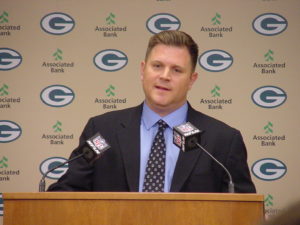 After the dust has settled, the Green Bay Packers 2020 NFL Draft class ranks among the worst in the league and still has Packers Nation shaking their heads at what transpired over the weekend.

A record 37 receivers were selected in a receiver rich draft, but none of those 36 went to the Packers, who entered the draft needing to add help on the outside to improve the arsenal with which Aaron Rodgers has to work with.

The Packers traded a 4th round pick to move up from 30th to 26th in the first round and selected Utah State quarterback Jordan Love.  General Manager Brian Gutekunst had given us some clues over the previous three weeks that he would at least consider such a move.  We all shook it off as a smoke screen, because the Packers have Aaron Rodgers under contract for the next four years.

The scenario was similar when the Packers used the 24th pick in the first round on Aaron Rodgers back in 2005, when Brett Favre was still going strong.  But that move turned out alright, so we move on. END_OF_DOCUMENT_TOKEN_TO_BE_REPLACED