You are here: Home / Archives for Kenyon Martin

After signing veteran Kenyon Martin to a pair of 10-day contracts, the Milwaukee Bucks signed the forward for the remainder of the 2014-15 season.

Martin has appeared in eight games for the Bucks this season and averaged 1.3 points and 1.1 rebounds in 5.9 minutes per game.

Martin signed his initial 10-day contract with the Bucks on Jan. 9, and was signed to a second 10-day deal on Jan. 19.

Martin and the Bucks are in Orlando to face the Magic tonight.  Orlando carries a 17-game home court win streak over the Bucks into tonight’s game.  The last Bucks victory in Orlando came in December of 2004.

The Milwaukee Bucks added point guard Jorge Gutierrez to their roster today, signing him to a 10-day contract.  Gutierrez will add some depth to the position after losing Kendall Marshall for the rest of the season with a torn ACL in his right knee.

The Bucks don’t need to make a roster move because Larry Sanders is currently serving a 10-game drug suspension and is being moved to the team’s suspended list.

The 26-year old Gutierrez played with the Canton Charge of the NBA’s Development League this season.  He played in 10 games for the Nets this END_OF_DOCUMENT_TOKEN_TO_BE_REPLACED 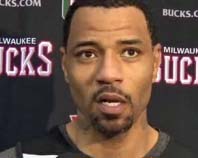 The Milwaukee Bucks made official this morning, the signing of veteran forward Kenyon Martin to a 10-day contract and releasing second-year guard Nate Wolters.

Martin is expected to take part in the team shootaround with the Bucks this morning and then be available tonight when they face the Minnesota Timberwolves at the BMO Harris Bradley Center.

Martin is being reunited with his former New Jersey Nets and New York Knicks teammate Jason Kidd, now the head coach of the Bucks.

Wolters saw limited playing time this season with the Bucks after playing in more than 50 games last season.

The Milwaukee Bucks are reportedly ready to sign power forward Kenyon Martin to a 10-day contract.

ESPN.com cited sources saying the Bucks have committed to add Martin to their roster this week, perhaps as early as today (Thursday), after letting a player go to open up a spot.

Martin teamed together as a player with Bucks coach Jason Kidd, leading New Jersey to back-to-back trips to the NBA Finals in 2002 and 2003.

Martin auditioned for the Bucks last week and is expected to help them try to fill the front court void left by the ongoing absence of center Larry Sanders.

The Bucks are 5-3 without Sanders.  He told reporters this week that there is no timetable for his return to the court. END_OF_DOCUMENT_TOKEN_TO_BE_REPLACED