You are here: Home / Archives for Kyle Korver

The Denver Nuggets pulled off a season sweep of the NBA-leading Milwaukee Bucks (53-12), pulling out a 109-95 win on Monday night in Denver.

The Bucks played without their top six scorers, including Giannis Antetokounmpo (knee).

Kyle Corver had 23 points to lead the Bucks off the bench.

Denver won both games in the two-game season series, winning 127-115 in Milwaukee back on Jan. 31.

The Bucks have now lost three straight games, all three coming on their trip out west.  They’ll return to Milwaukee and host the Boston Celtics on Thursday night.

The Dallas Mavericks put an end to the Milwaukee Bucks’ 18-game winning streak with a 120-116 victory on Monday night at Fiserv Forum.

Kristaps Porzingis led Dallas with 26 points, 12 rebounds and two blocked shots.  Seth Curry had 26 points off the bench, as Dallas improved to 7-2 in their last nine games.  The Mavericks played without their top player, Luka Doncic, who was sidelined with an ankle injury.

Giannis Antetokounmpo poured in 48 points and pulled down 14 rebounds for the Bucks, who lost for the first time since November 8th.  Kyle Korver hit five three-pointers and finished with 17 off the bench. END_OF_DOCUMENT_TOKEN_TO_BE_REPLACED

After not playing many of their regulars on Monday night in Chicago, the Milwaukee Bucks used their starters on Wednesday night and cruised to a 133-99 win over the Utah Jazz at Fiserv Forum.

Giannis Antetokounmpo took the ball to the rim time after time, getting multiple dunks to finish with 22 points 11 rebounds and four assists in 20+ minutes of playing time.

Donte DiVincenzo bounced back from a poor shooting night in Chicago on Monday by scoring 10 points on 4 of 7 shooting.  He added four rebounds, two assists and two steals.

Kyle Korver played his first game for the Bucks and took three shots, making all three of his three-pointers for nine points.  Thanasis Antetokounmpo also finished with 9 points and five rebounds.

Bucks starting point guard Eric Bledsoe did leave the game in the second quarter with an oblique strain.  The Bucks are hoping that’s an injury that won’t keep him out long.

The Bucks are 2-0 in exhibition play and will travel to Dallas to face the Mavericks on Friday night. 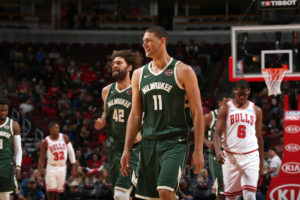 Playing without a number of their regulars, the Milwaukee Bucks opened the exhibition season with a 122-112 win over the Chicago Bulls at the United Center.

The Bucks also got 12 points and 9 rebounds from Sterling Brown.  Point guard Frank Mason III started at point guard and scored 14 points with six assists and four steals in 27 minutes.

The Bucks return home to host the Utah Jazz at Fiserv Forum on Wednesday night.