You are here: Home / Archives for Lee Tunnell

Prior to working for the Cubs, Haines spent eight years with the Miami Marlins, spending time as a hitting coach and manager at the Class A and AAA levels.

Hook spent 11 years in the Brewers organization and replaces Derek Johnson, who surprised the Brewers after the 2018 season by leaving for the same position with the Cincinnati Reds. END_OF_DOCUMENT_TOKEN_TO_BE_REPLACED

The Brewers also announced that head athletic trainer Dan Wright will not return.

Assistant hitting coach Jason Lane will be considered for Coles replacement but was told that he is free to pursue other opportunities.

The 56-year-old Coles was in his fourth season as the Brewers’ hitting coach.

The Brewers finished seventh in the National League with 754 runs scored.  They were second in home runs with 218 and third in total bases with 2,352.  But the team struggled with runners in scoring position, ranking 11th (.246).

Coles told the Brewers he was ready for a new challenge.

The Milwaukee Brewers officially announced the hiring of Derek Johnson as the teams pitching coach and Pat Murphy as the teams bench coach today. 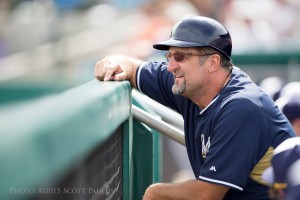 Brewers general manager Doug Melvin said, “It is important that we make every effort to try to improve our bullpen performance.”  “While Stan is not solely responsible, I felt this change was the first step and was necessary.  Stan has been a loyal member of the Brewers organization for 11-years.  His hard work and dedication has been an integral part of the Brewers’ success and is greatly appreciated.  His professionalism, knowledge and personality will be missed.”

Tunnell is in his fourth season on the Brewers organization.  Prior to that, he’s spent time with the Cincinnati Reds and Texas Rangers.

Brewer relievers have gone 15-26 with a 4.80 ERA this season.  The bullpen has recorded the most losses and blown saves (20) in the Major Leagues and ranks 28th ERA and 29th in opponent batting average (.274).

Kyles had served as the Brewers bullpen coach since 2009.