You are here: Home / Archives for Logan Schafer

Matt Garza wowed the home crowd in his first start in a Milwaukee Brewers uniform.  Unfortunately for both, the Brewers lost to the Atlanta Braves 1-0 in a classic pitchers duel at Miller Park.

Garza held the Braves hitless through 6 2/3 innings before Chris Johnson clubbed a solo home run to left-center that provided Atlanta with the only run they would need to win.

AUDIO: Matt Garza says he was trying to stay aggressive :11

AUDIO: Garza hated to lose this one :11

Atlanta starter Aaron Harang was equally as impressive, taking a no-hitter into the 7th himself.  His no-hit bid ended 2-outs sooner than Garza’s though.  Logan Schafer broke it up with a leadoff single to center.  But Harang got some help from the bullpen to get out of the 7th and earns the victory. END_OF_DOCUMENT_TOKEN_TO_BE_REPLACED

Estrada held the Royals to a pair of hits and the Brewers right hander finished the spring with 17 straight scoreless innings.

The Royals got both of their runs in the 9th inning off of reliever Francisco Rodriguez.  The Brewers ended spring ball with a 13-18 record.  They’ll open the regular season Monday afternoon against the Atlanta Braves at Miller Park. 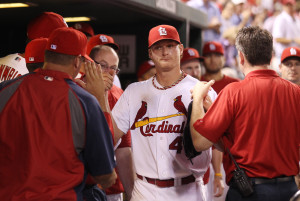 into the 7th, leading the St. Louis Cardinals to a 4-2 win in their series opener at Busch Stadium on Tuesday night.

Miller allowed 5-hits with 4-strikeouts and 2 walks in 6 2/3 innings, improving to 3-0 with a 1.08 ERA in four starts against Brewers this season.

Wily Peralta had struggled against the Cardinals in two previous starts this season, but last night, he was dialed in as well.  Peralta was pitching no-hit ball into the 6th when Matt Holliday clubbed a 2-run homer to break it up.  Peralta (9-15) allowed 3 runs and 3 hits with 7 strikeouts in 6 2/3 innings.

The Brewers avoided the shutout when pinch-hitter Logan Schafer clubbed a 2-run homer off of Edward Mujica in the 9th.

Scooter Gennett also had two hits for the Brewers, increasing his average .394 on the season.

The Cardinals have won 11 of their last 14 and have a 1-game lead on the Pittsburgh Pirates atop the NL Central.  The Pirates beat Texas 5-4 last night.

In his best outing of the season, Kyle Lohse worked 8-strong innings to lead the Milwaukee Brewers to a 4-1 win over the Washington Nationals on Wednesday night.

Lohse allowed a single run on 4-hits with just 1 walk.  He threw 103 pitches and set the Nationals down in order in five of his eight innings.

AUDIO: Kyle Lohse on sticking with his approach :20

The Brewers broke through offensively in the 5th.  Sean Halton led off with a double and Logan Schafer singled and moved up to second on a sacrifice bunt.  Norichika Aoki’s single to center drove in Halton and Schafer.

Schafer added a 2-run triple in the 6th inning to add some insurance runs for the Brewers, who won their second straight.

Francisco Rodriguez worked the 9th for his 301st career save.  That moves him into 23rd place all-time.  Rodriguez needs three more to move past former Brewer Doug Jones and into 22nd place.

The Milwaukee Brewers saw their losing streak grow to 6-games, falling to the Minnesota Twins 8-6 on Thursday night at Target Field.

The Brewers have lost a season-high six straight games and dropped to 5-22 in the month of May.  That assures the Brewers of at least tying the franchise record for fewest victories in May.  A loss to the Philadelphia Phillies will set a team record.

Kyle Lohse gave up a career-high four home runs in just 4 2/3 innings in his worst outing of the season. END_OF_DOCUMENT_TOKEN_TO_BE_REPLACED

The Milwaukee Brewers have recalled RHP Wily Peralta, RHP Tyler Thornburg and OF Logan Schafer from Triple-A Nashville and recalled RHP Josh Stinson from Double-A Huntsville.  All four players will join the Brewers tonight at Miami.

Peralta, who went 7-11 with a 4.66 ERA in 28 starts with Nashville, will start Wednesday’s game at Miami.  He made his Major League debut in a relief appearance with the Brewers on April 22 vs. Colorado.  Thornburg is in his third stint with Milwaukee.  Schafer hit .278 with 11 HR, 40 RBI and 16 stolen bases in 124 games with Nashville.

Stinson went 11-0 with a 3.16 ERA in 29 games (24 starts) with Huntsville.  His 11 wins tied for the most among Brewers minor leaguers and was tied for second in the Southern League, while his 3.16 ERA ranked third in the league.