You are here: Home / Archives for Melvin Gordon Former Wisconsin Badger and current Denver Broncos running back Melvin Gordon could be facing NFL discipline after he was cited late Tuesday for driving under the influence.

ESPN.com reports Gordon was also cited for speeding, between 25 and 39 mph over the posted limit, in downtown Denver.

Gordon was taking part in meetings on Wednesday morning, when players returned to start preparing for this weeks game at New England.

Gordon signed a two-year, $16 million deal with the Broncos during the offseason.  He leads the Broncos with 281 rushing yards and three rushing touchdowns.  He also leads the team in carries with 65.

Broncos players had the last three days off after their game against the New England Patriots, originally scheduled for this past Sunday, then postponed one day, was moved to this coming Sunday.  Gordon, along with several teammates, voiced their displeasure on social media over losing their bye week after a New England player tested positive for COVID-19.

Former Wisconsin Badger running back Melvin Gordon will reportedly end his holdout and report to the Los Angeles Chargers on Thursday.

The Kenosha native has been missing since the start of training camp in a contract dispute.  He’s not expected to play when the Chargers (1-2) face the winless Miami Dolphins on Sunday.

The Chargers will have the next two games after that, at home.  They’ll face the Denver Broncos and the Pittsburgh Steelers the following two weeks.

Former Wisconsin Badgers running back Melvin Gordon wants a contract extension with the Los Angeles Chargers and wants it  now.

The former Badger has reportedly told the Chargers to get an extension done now or he won’t be around for the start of training camp in less than two weeks.  Gordon’s camp said unless he gets an extension, he’ll demand a trade.

The two-time Pro Bowler has three straight seasons of at least 1300 yards from scrimmage, and his 38 career touchdowns thus far ranks only behind the Rams’ Todd Gurley among 2015 draft picks. 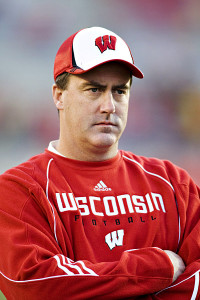 Wisconsin Badger coaches and players say they did it last year and they can do it again.  Dropping the season opener against Northwestern didn’t stop Wisconsin from winning the 2014 Big Ten West Division title.  They’re hoping Saturday’s 10-6 loss to Iowa will be followed by a similar winning streak.

A crowd of nearly 81-thousand at Camp Randall Stadium left disappointed, even though the Badger defense kept the team in the game.  Iowa managed only 221 total yards of offense, fewer than 70 in the second half.

Iowa turned two Wisconsin turnovers into ten-points in the first half and beat the Badgers in Madison for the first time since 2007.

A fumble with the Badgers on the Hawkeye one-yard line was the most critical offensive failure.

Unlike last year, U-W doesn’t have a super-star tailback like Melvin Gordon to help lead the comeback from the troubling start.  The Badgers (3-2) play at Nebraska (2-3) this coming Saturday.  The Cornhuskers fell to Illinois 14-13 yesterday.

The San Diego Chargers wanted to make sure they picked up a weapon in the NFL Draft, so they traded up two spots to secure former Wisconsin Badgers running back Melvin Gordon with the 15th pick overall.

Gordon, who finished as a Heisman Award finalist and the Big Ten’s Offensive Player of the Year, becomes the fourth consecutive Wisconsin back to be drafted and the first since 2001.

For the UW program, Gordon’s selection is the 29th overall in the first round of the NFL Draft, and extends a consecutive years streak of having a player drafted to 37.

Gordon helped Wisconsin to a Big Ten West Division title and an Outback Bowl victory in his final season.

In high school, he played alongside Michigan State cornerback Trae Waynes at Kenosha Bradford, winning a WIAA Division 1 state title in 2011. Waynes was taken four spots ahead of Gordon by the Minnesota Vikings. 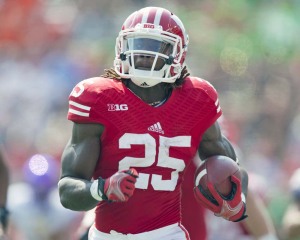 Wisconsin running back Melvin Gordon was named to the A.P. All-American team today.  Gordon is one of fourteen Big Ten players to make the three teams.

Gordon won the Doak Walker award as the nation’s top running back and finished runner-up in the Heisman Trophy balloting, behind Oregon quarterback Marcus Mariota.

Three other Big Ten Conference players made the first team.  On offense, Gordon is joined by RB Tevin Coleman of Indiana and OT Brandon Sherff of Iowa.

On defense, Ohio State’s Joey Bosa was named to the AP first team.

Mariota has completed 68.3% of his passes for 3,783 yards, throwing for 38 touchdowns with only two interceptions.  He also rushed for 669 yards and 14 touchdowns.

Melvin Gordon announced the decision that everyone knew was coming.  The record-setting Wisconsin Badger running back is giving up his final season of eligibility in Madison to enter the 2015 NFL draft.

Gordon leads the nation in rushing yards with 2,336, rushing yards per game (179.7), rushing touchdowns (26) and is fourth in yards per carry (7.56).  It means the New Years Day Outback Bowl in Tampa, Florida, will be his last at Wisconsin.

Gordon is in Orlando for the presentation of the Doak Walker Award tonight.  Then its on to New York City for the Heisman Trophy presentation on Saturday night.

Gordon is the favorite to win the Doak Walker Award tonight, but Oregon quarterback Marcus Mariota is expected to win the Heisman Trophy.

With Gordon leaving school a year early, the job in Madison is expected to go to Corey Clement, who has rushed for 844 yards, nine touchdowns and a 6.4 yards per carry average in limited action.