You are here: Home / Archives for NASCAR

Kasey Kahne grabbed the lead on a restart following a caution with 23 laps to go and held off Matt Kenseth in a two-lap shootout to win the NASCAR Sprint Cup race at Atlanta Motor Speedway on Sunday night.

It’s Kahne’s first win of the season and earned him a spot in the Chase for the Sprint cup.  Kenseth also qualified for the Chase on points.

Tony Stewart’s much-anticipated return to racing ended a little more than halfway through the race.  He hit the wall for the second time after his right front tire blew out on Lap 172, ending his night with a 41st place finish.

Kenseth began the night fifth in the points race, but not yet locked into the Chase because he had no wins.  Kenseth needed to finish seventh or better to secure his place in the playoffs.

The defending Sprint Cup Series champion, who failed to qualify for the Chase this year, grabbed his first win of the season and first since Sept. 30, 2012.  He passed Kasey Kahne with nine laps to go to take the checkered flag.

Kahne finished second and Chase points leader Matt Kenseth third.  Kenseth remains in the playoff point lead with 2,225.  That’s a slim 4-point lead over Jimmie Johnson at the midway mark in the Chase for the Championship.

Kevin Harvick pulled away from Kurt Busch and Jeff Gordon on a late restart to win a wreck-filled race at Kansas Speedway.

With the win, Harvick moved into third in points behind leaders Matt Kenseth and Jimmie Johnson.  Kenseth, who finished 11th in Sunday’s race, has a slight 3-point lead over Johnson in the Chase for the Sprint Cup Championship.

There were 15 cautions in the race, breaking the record of 14 set in last year’s race.

Harvick sat on the pole for the first time in 254 races.  He also won the last time he qualified first, at New Hampshire in 2006.

Jimmie Johnson held off teammate Dale Earnhardt Jr. down the stretch to win for a record eighth time at Dover International Speedway.

The entire top 10 Sunday was made up of Chase for the Sprint Cup championship drivers.

Joey Logano, Jeff Gordon and Kyle Busch rounded out the top five.  Cambridge native Matt Kenseth, who won the first two Chase races, finished seventh.  He kept his points lead even as he fell short in trying to become the first driver to win the first three Chase races. 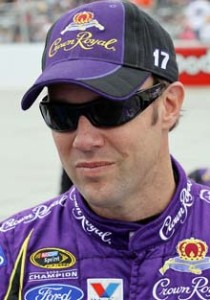 Kenseth and Busch made it a 1-2 finish for Joe Gibbs Racing and helped the organization win for the fifth time in the last seven races, dating to Busch’s win at Watkins Glen in August.

Kenseth joins Greg Biffle (2008) and Stewart (2011) as the only drivers to win the first two Chase races.  Steward went on to win the title.

Kenseth now heads to Dover, where he’s a two-time winner.  He led 29 laps there earlier this year before an engine failure ended his day.

Kenseth entered as the top seed in the Chase for the Championship and showed why after two rain delays that totaled 6 1/2 hours.  He passed Busch on a restart with 23 laps remaining and padded his lead in the Sprint Cup points race.

Kenseth is in his first season with Joe Gibbs Racing.  He won five times in the first 26 races, which is a series best.

The last two Sprint Cup winners started their run by winning at Chicagoland.  Tony Stewart did it in 2011 and Brad Keselowski pulled it off last year.

The Johnsville Sausage 200 went to double-overtime Saturday at Road America in NASCAR Nationwide Series Racing.  In the end, A.J Allmendinger took the checkered flag for his first career NASCAR victory in a green-white checkered finish.

This was the 4th straight year the Elkhart Lake track has hosted a Nationwide race.  According to Dave Kallmann of the Milwaukee Journal-Sentinel, the track is hopeful that in can someday host a Sprint Cup race.

The NASCAR Nationwide Series returns to Road America in Elkhart Lake Saturday for the Johnsonville Sausage 200.  It’s the 4th year that series comes to the 4-mile track in Wisconsin.  The first race was held in 2009 with Carl Edwards taking the checkered flag.  Nelson Piquet Jr. is the defending champion.

The race is paired up with the NASCAR Sprint Cup Race in Sanoma, California which be will be run on Sunday.  For the drivers running in both races, the travel time just adds to the challenge.  Brian Vickers is one of those running both…

AUDIO: Brian Vickers on running in both series this weekend :14

END_OF_DOCUMENT_TOKEN_TO_BE_REPLACED

Not to often, does a professional race car driver fail inspection and draw heavy penalties and then see some relief.  That’s exactly what happened with Cambridge native Matt Kenseth.

Kenseth won in Kansas last month, but he was hit with severe penalties after his car failed a post race inspection.  Kenseth appealed that ruling and yesterday found out that the loss of points has been decreased from 50 to 12.  All other components of the penalty were eliminated.  That means Kenseth gets his bonus points back and he moves from 12th to 4th in the Nascar point standings.

The only thing that stood up from the original penalties, was the $200,000 fine imposed upon crew chief Jason Ratcliff.  But Ratcliff’s suspension was reduced from six point races to one, plus probation for the three events following his reinstatement.

Kenseth said via Twitter: “Glad to have today behind us so we can get our focus back on racing.  I respect NASCAR and the appeals process, I feel like they got it right.”

Wisconsin’s Matt Kenseth picked up his second NASCAR Sprint Cup Series win of the season Sunday in Kansas, however, the only thing we will get to keep is the trophy.  Kenseth was docked 50-driver points Wednesday when news broke that his engine did not pass the post race inspection.

NASCAR determined that one of eight connection rods did not meet the minimum race requirements.

Along with Kenseth’s penalty, his crew chief, Jason Ratcliff, was fine $200,000, suspended for 6-races and put on probation for the rest of the year.  Also, owner Joe Gibbs lost his license for the next 6-races and was docked 50-owners points.  The team will appeal the decision.