You are here: Home / Archives for National Baseball Hall of Fame 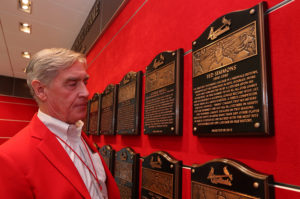 The National Baseball Hall of Fame is postponing this year’s induction ceremony due to the coronavirus pandemic.  The Hall announced Wednesday that the July 26th induction ceremony will not be held and will instead be included during next year’s festivities.

That means former Milwaukee Brewer Ted Simmons will have to wait a year, as well as Larry Walker and Derek Jeter.

Simmons debuted with the St. Louis Cardinals in 1970 and was traded to the Brewers after the 1980 season.  He helped Milwaukee reach the playoffs in 1981 and advance to the World Series the following year.  Simmons hit two home runs in that 1982 World Series but the Brewers lost to his former Cardinals team in a seven-game thriller.

Simmons finished his p laying career from 1986-88 as a part-timer with the Atlanta Braves, then served as the general manager of the Pittsburgh Pirates in the early 1990’s.

Simmons final playing totals included a .285 batting average, 2.472 hits, 483 doubles, 248 home runs and 1,389 RBI.  Among those players who played at least 50% of their games at catcher, Simmons ranks second in his, second in doubles, second in RBI and fifth in runs.