You are here: Home / Archives for Nebraska Cornhuskers

The 9th ranked Wisconsin men’s basketball team got off to one of its worst starts in recent memory.  They didn’t reach double-digit points until the 5:26 mark of the first half, but it was the defense that held strong in a 67-53 Big Ten Conference opening win over the Nebraska Cornhuskers at the Kohl Center on Tuesday night.

Brad Davison had 15 points to lead four players in double figures.  He added seven assists and three rebounds in the win.  Aleem Ford added 13 points and eight rebounds and Micah Potter had a double double with 10 points and 11 rebounds for the Badgers (7-1, 1-0 Big Ten).

The Badgers didn’t score until 4 minutes and 43 seconds had elapsed and it came from freshman Jonathan Davis, a three-pointer off the bench.

The difference in the game, besides the Badgers solid defensive play of course, was Wisconsin picked up their shooting, while Nebraska (4-4, 0-1) didn’t.  The Huskers hit just 18 of 54 field goal attempts and 8 of 27 from three-point range.

The Badgers will hit the road on Christmas Day to face the Michigan State Spartans at the Breslin Center in East Lansing.

Former Wisconsin Badgers guard Kobe King will reportedly stay in the Big Ten after his departure from UW in late January.  CBS Sports first reported that King plans to transfer to Nebraska to play for Fred Hoiberg and the Cornhuskers.

The Badgers finished with five service aces (all coming in the first set), headlined by three from Hilley and two from Tiffany Clark, while also edging Nebraska (28-5) in blocks (11-5), led by a match-high eight from Rettke. END_OF_DOCUMENT_TOKEN_TO_BE_REPLACED

Badger junior Sydney Hilley put up an impressive 48 assists in the match and added eight digs, just two short of her ninth double-double of the season. END_OF_DOCUMENT_TOKEN_TO_BE_REPLACED

The Wisconsin Badgers jumped out to an early 14-point lead on Nebraska, before the Cornhuskers bounced back to take a lead half way through the second half.

That’s when Charlie Davis came off the bench to neutralize the threat and sophomore guard Brad Davison went on a run to help the Badgers put the game away.  Davison scored 01 of his team-high 13 points in the second half.

It was a balanced, team effort for the Badgers, who got 13 points and nine rebounds from bench players.  Brevin Pritzl led that group with eight points.

Nebraska got 18 points from Isaiah Roby in the loss.

Wisconsin’s defense held the Huskers to just 17 of 60 from the field.

The Cornhuskers led by as many as 13 points in the second half, then held off a late Badger rally to hand on for the win.

The Badgers cut back on turnovers, committing just 10, but went just 3 for 17 from three-point range.

Brad Davison added 15 for the Badgers but went just 5 of 15 from the field. 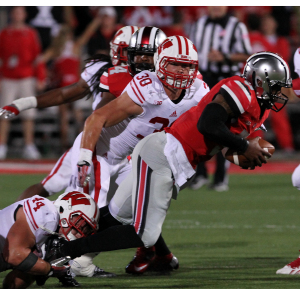 The challenge starts with Nebraska running back Ameer Abdullah, who just like his friend Melvin Gordon, is trying to put up some big numbers today to make a statement in the Heisman Trophy race.  Abdullah has been bothered by nagging injuries, but will play today, trying to add to his 19 touchdowns, as well as games with more than 200 yards rushing (currently at four).

The Badgers also have to contend with Nebraska quarterback Tommy Armstrong, who has rushed for 571 yards and four touchdowns for the 11th ranked Cornhuskers.

Nebraska is 8-1 on the season, 4-1 in Big Ten play.  The 22nd ranked Badgers are 7-2 and also come in with a 4-1 conference mark.  The Badgers and Cornhuskers share the Big Ten West Division lead at 4-1 with Minnesota.  But the winner of today’s game, controls their own destiny with two games left to play, to represent the West Division in the Big Ten title game.