You are here: Home / Archives for Nick Barnett 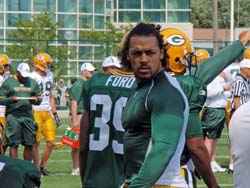 Since the NFL started determining the leagues best team by squaring off in the Super Bowl, a total of eight teams have won back-to-back titles.  The Green Bay Packers are looking to be the 9th.

Veteran wide receiver Donald Driver said it starts with attitude.  Driver said they must have the same attitude and approach as they

did a year ago.

Several things factor into a teams ability to repeat.  First and foremost is their attitude.  After winning the Super Bowl last year, is every player as hungry to win it again?  Are they as hungry as they were for the first title?  With other teams gunning for the champs, are they ready to handle everybody’s best game?  All questions that will be answered in time.

Injuries are a factor as well.  The Packers proved last season that they could get through a number of injuries and still win.  But key injuries are the key.  Not to diminish the loss of some of the players the Packers lost, but they didn’t see Aaron Rodgers go down.  They didn’t lose Clay Matthews or Charles Woodson or even B.J. Raji on defense.  For the most part, their offensive line stayed in tact all season and while TE Jermichael Finley went down for the year, Greg Jennings stepped up at wide receiver and has his best season. END_OF_DOCUMENT_TOKEN_TO_BE_REPLACED 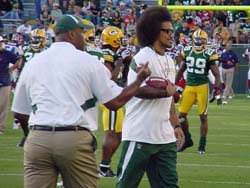 Chillar signed with the Packers in 2008 as an unrestricted free agent from St. Louis.  He played in 34 games with 12 starts during his three seasons in Green Bay.  He was limited to eight games in 2010 due to a shoulder injury after missing just seven games in his first six NFL seasons. END_OF_DOCUMENT_TOKEN_TO_BE_REPLACED

The Green Bay Packers released A.J. Hawk yesterday.  Now the two sides appear to be close to a new deal today.  They have until 11pm tonight to get a deal finalized, avoiding an interruption by a possible work stoppage with an expiring collective bargaining agreement.

With Desmond Bishop already signing a contract extension during the season, Hawk’s deal could mean the end for either Nick Barnett or Brandon Chillar, both of whom are coming off of season ending surgeries. 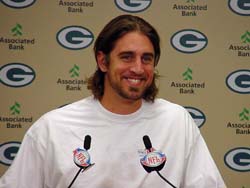 Just when you thought the Team-Photo flap was done with, the controversial subject reered its ugly head again on Saturday when Green Bay Packers quarterback Aaron Rodgers criticized  linebacker Nick Barnett and tight end Jermichael Finley for their complaints earlier this week.

That in turn triggered another Twitter storm in response from Barnett and Finley. END_OF_DOCUMENT_TOKEN_TO_BE_REPLACED 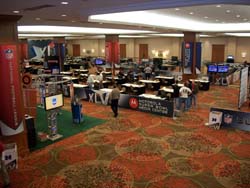 The only player that didn’t practice this week was starting outside linebacker Eric Walden, who is sidelined by an ankle injury and has been getting plenty of extra treatment on it for the last week.  Coach Mike McCarthy did reiterate at a news conference this week that Eric Walden is his starter if he’s able to play on Sunday.  He’ll resume workouts on Wednesday. END_OF_DOCUMENT_TOKEN_TO_BE_REPLACED

The Green Bay Packers will take their team photo in Dallas next Friday,

ending the first controversial issue they’ve had to face while preparing for Super Bowl 45.

The move from Tuesday to Friday will allow all of the teams players, including those on injured reserve, to be a part of the team’s Super Bowl picture.  Those players on I.R. aren’t scheduled to arrive in Dallas until Thursday. END_OF_DOCUMENT_TOKEN_TO_BE_REPLACED 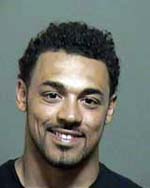 Reserve, 2 of the 16 players to wind up on that season ending injury list.  Now they’re being kept out of the Green Bay Packers’  Super Bowl photo and are not very happy about it

Both players tweeted yesterday.  Barnett called it “sad” and Finley said it’s “not cool”.  The Packers say it’s a team decision.  They say the photo is being taken after media day next Tuesday and the 16 players on I.R. won’t be arriving in Dallas until next Thursday.

The Green Bay Packers will play today without a number of key players.  They’ll be without Mark Tauscher on offense and Nick Barnett, Morgan Burnett and Brandon Chillar on defense.  They’ll play in one of the loudest venues in the NFL at Washington’s FedExField and despite being 3-1, are wondering why they haven’t been able to put teams like the Detroit Lions away.

In the long term, these key injuries may take their toll on the Packers, but under Mike McCarthy, the Packers have more times than not, been able to rally when their backs were against the wall to win.  I look for them to do the same against the Washington Redskins today.

Aaron Rodgers questioned the head coach last week and called for the Packers to have their top players on the field more in key situations.

The Packers have a difficult stretch ahead with Miami, Minnesota, the New York Jets and the Dallas Cowboys ahead.  But the only game that concerns the Packers, is today’s game against Washington.

My concerns with the Packers are special teams and penalties.  They’re problems the Packers have struggled with on the road in loud environments.  That’s the situation they’ll be faced with today.  But I believe they’ll do enough to overcome those problems and find a way to go to 4-1.

The Packers lost rookie safety Morgan Burnett for the rest of the season after an ACL injury.  I chatted with Burnett earlier this week.

Green Bay Packers coach Mike McCarthy revealed for the first time during a news conference today that two key members of the Packers football team had offseason procedures to clean up some knee problems.

McCarthy said at a news conference during OTA’s today that wide receiver Donald Driver and linebacker Nick Barnett were both being held back after undergoing scopes after the conclusion of last season.