You are here: Home / Archives for Ohio State Buckeyes

The Wisconsin Badgers had a 2-1 lead against 6th ranked Ohio State after two periods, then came unglued in the third, falling to the Buckeyes 6-2 in the first of a two game series in Columbus, Ohio.

It’s the third straight defeat for the Badgers, who had dropped two straight at home against Minnesota prior to Friday night’s defeat.

The Buckeyes scored five third period goals and won for just the first time this season when trailing going into the final period.

Wisconsin’s frustration led to a number of scuffles in the final minutes.  Badger defenseman Peter Tischke was ejected with 89 seconds left after a cross-check on Ohio State’s Kevin Miller.

The Badgers (14-16-4, 8-12-3-1 Big Ten) had grand visions at one point this season of returning to the NCAA Tournament.  The only way that will happen now is if UW can find a way to gather themselves quickly and win the Big Ten Tournament.  That would carry an automatic bid to the NCAA Tournament, but it would appear to be a major stretch at the moment.  The Badgers will have to play all of the Big Ten Tournament on the road. END_OF_DOCUMENT_TOKEN_TO_BE_REPLACED

The Buckeyes, who entered the game averaging 43.8 points and 529.8 yards a game, racked up 309 yards in the first half alone and took a 21-10 lead into the locker room at halftime. END_OF_DOCUMENT_TOKEN_TO_BE_REPLACED 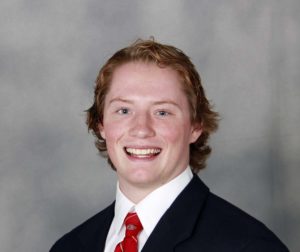 Wisconsin’s matchup with Big Ten West Division rival Iowa at Kinnick Stadium in Iowa City will kick off at 11 a.m. (CT) on Oct. 22.

The battle for the Heartland Trophy will be broadcast on either ABC, ESPN or ESPN2.

Iowa snapped Wisconsin’s three-game win streak in the series by claiming a 10-6 victory last season in Madison.  The Badgers lead the all-time series between the rivals, which dates back to 1894, by a slim 44-43-2 margin.

The two teams have split their 10 meetings since the Heartland Trophy was added to the rivalry in 2004.

As the Badgers prepare for Saturday night’s home game against the Ohio State Buckeyes at Camp Randall Stadium, they moved up to 8th in the A.P. Top 25 poll, the same ranking they held before 14-7 loss to Michigan.

ESPN’s College Gameday crew will be in Madison this Saturday for Wisconsin’s Big Ten matchup against the second-ranked Ohio State Buckeyes. 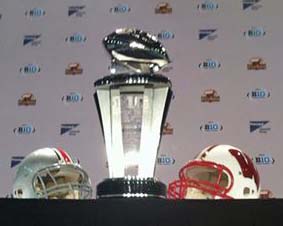 So the Buckeyes depth is challenged again, this time with 6’5 sophomore Cardelle Jones, who takes over for Barrett. END_OF_DOCUMENT_TOKEN_TO_BE_REPLACED