You are here: Home / Archives for Oklahoma City Thunder

Despite a triple-double from Giannis Antetokounmpo, the Milwaukee Bucks ended a 6-game road trip with a 114-109 loss to the Oklahoma City Thunder on Sunday night in Oklahoma City.

Justin Jackson’s long 3-pointer with 14.9 seconds left was the final back-breaker for the Bucks.  Jackson had 22 points to lead the Thunder.  Al Horford added 20, Lu Dort had 19 and Darius Bazley 18 in the win.

Antetokounmpo had 24 points, 17 rebounds and 10 assists for his fourth triple-double of the season.  Khris Middleton added 23 and Bobby Portis had 21 for the Bucks, who wrapped up the trip with three straight losses and a 3-3 road trip record.

The Bucks missed 14 of its first 15 shots to start the second quarter and finished the first half by scoring a season low 41 points.

The Bucks return to Milwaukee to play host to the Toronto Raptors at Fiserv Forum on Tuesday night.

Giannis Antetokounmpo had 35 points and 16 rebounds as the Milwaukee Bucks wrapped up their four-game road trip with a 121-119 win over the Thunder in Oklahoma City on Sunday night.

Eric Bledsoe added 25 points, including two crucial free throws in the last four seconds as the Bucks have won five of their last six games and finished their trip out west with a 3-1 record.

The Bucks win came at a cost, though.  Khris Middleton left the game with a leg injury and did not return.

Dennis Schroder led the Thunder off the bench with 25 points and Shai Gilgeous-Alexander added 22.  Chris Paul hit a three with less than a second left for the final margin.

Oklahoma City has lost two of its last three games.

The Bucks get a few days off now.  They return to Fiserv Forum on Thursday night to face the Chicago Bulls.

The Milwaukee Bucks were simply looking to close out the regular season Wednesday night without getting anybody hurt.  They accomplished that, playing without starters Giannis Antetokounmpo, Brook Lopez and Eric Bledsoe, falling to the Oklahoma City Thunder 127-116.

Khris Middleton scored 21 points on 9 of 14 shooting in just 17 minutes.

The Bucks will open the playoffs on Sunday against the Detroit Pistons, a team they swept, 4-0, during the regular season.  Detroit wrapped up the 8-seed by knocking off the New York Knicks 115-89.

Bucks guard Tim Frazier played all 48 minutes and finished with 29 points and 13 assists.  Bonzie Colson had a career-high 21 points and 10 rebounds but isn’t eligible for the playoffs.  D.J. Wilson had 18 points and 17 rebounds in 47 minutes.

Russell Westbrook had a triple-double with 15 points, 17 assists and 11 rebounds.  The Thunder are the number-six seed in the upcoming Western Conference playoffs. 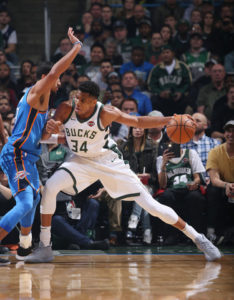 The Milwaukee Bucks struggled to get good offensive looks and when they did, they struggled to make shots in a 110-91 loss to the Oklahoma City Thunder on Tuesday night at the BMO Harris Bradley Center.

The Thunder worked hard to make life difficult for Bucks star Giannis Antetokounmpo and the rest of the Bucks team wasn’t up to the challenge.

Milwaukee jumped out to an 8-4 lead, then went six-plus minutes without a basket.  The Thunder went on a 16-0 run and the Bucks could never get back in the game.

Antetokounmpo finished with 28 points on 9 of 14 shooting, but no other Bucks player reached double figures.  As a team, the Bucks shot 42% from the field and 30% from three-point distance.  They also turned it over 15 times.

The Bucks head to Charlotte to face the Hornets on Wednesday night.  It’s the second meeting between the two teams.  The Bucks picked up a 103-94 victory on Oct. 23 in Milwaukee.

Russell Westbrook had 12 points, 13 rebounds and 13 assists to post his record tying 41st triple-double of the season as the Oklahoma City Thunder rolled to a 110-79 win over the Milwaukee Bucks on Tuesday night.

The Bucks did little to provide any resistance in what turned out to be their worst defeat of the season.  Westbrook wrapped up his triple-double with 9:17 left in the third quarter.  He was able to get plenty of rest, playing only 27 minutes before giving way to the Thunder bench.

The Bucks trailed 63-39 at the half and just didn’t have it.  Michael Beasley led the way with 14 points in 12 minutes off the bench.

Enes Kanter led all scorers with 17 points for the Thunder. END_OF_DOCUMENT_TOKEN_TO_BE_REPLACED