You are here: Home / Archives for Ramon Sessions

Good starts have not been common place for the Milwaukee Bucks this season.  But last night, they poured in 37 points in the first-quarter and held on to beat the Cleveland Cavaliers 119-116 at the BMO Harris Bradley Center.

Reserves John Henson and Chris Wright scored  15 and 14 points respectively, and had a big hand in the big start for the Bucks.  The two combined to hit 8 for 8 from the field and score 17 of the Bucks 37 first-quarter points.

The win is the second against the Cavaliers this season as the Bucks (15-64) moved within two games of Philadelphia (17-62) at the bottom of the NBA standings with three games left to play this season.

The Bucks will travel to Washington tonight, Toronto on Monday night and then return home for their final game of the season, against the Atlanta Hawks on Wednesday.

Brandon Knight led the Bucks in scoring with 24 points and Ramon Sessions added 20 points and 7 assists.

Despite the fast start, the Bucks trailed by seven at halftime and made 6 of 8 free throws in the final two minutes to put the game away. 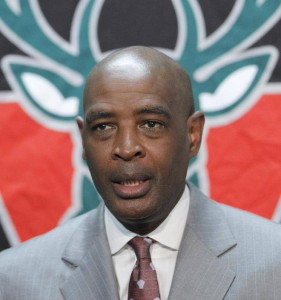 Lebron James had 17 points and Chris Bosh 15 as the Miami Heat stayed percentage points in front of the Indiana Pacers.

Ramon Sessions scored a team high 19 points, but the Bucks as a team shot just 43% from the field and turned it over 17 times.  Not exactly a great birthday gift for head coach Larry Drew, who turned 56 years old on Wednesday.

The Bucks ave seven games left in the season, starting with a trip to Chicago to face the Bulls on Friday night.

The Milwaukee Bucks lost their 60th game of the season (14-60), letting a fourth quarter lead get away in a 116-111 loss to the Detroit Pistons in Auburn Hills, Michigan.

The Bucks suffered their 10th straight road loss and their 20th in the last 21 games.

Brandon Knight had 25 points and Ramon Sessions added 20 points and 11 assists for the Bucks.

The Bucks have eight games left in the regular season, starting with a trip to Miami on Wednesday.

The Milwaukee Bucks earned just their 14th victory of the season and 3rd against a Western Conference foe, beating the Los Angeles Lakers 108-105 at the BMO Harris Bradley Center on Thursday night.

Two of the three Bucks wins against teams from the West, have come against the Los Angeles Lakers.  They also beat the Lakers in Los Angeles on New Years Eve.

The Bucks did lose guard Giannis Antetokounmpo in the fourth quarter after he suffered an ankle sprain.

Forward Jordan Hill led the Lakers with a career-high tying 28 points and 16 rebounds.

Blake Griffin had 27 points and 14 rebounds as the Los Angeles Clippers made it consecutive 50-win seasons in a 106-98 win over the Milwaukee Bucks last night.

This is Doc Rivers’ fifth 50-win season as a head coach, the other four coming with the Boston Celtics.

Ramon Sessions and Jeff Adrien were both inserted into the starting lineup for the Bucks.  Sessions finished with 28 points, while Adrien had 14 points and 7 rebounds in the loss.

The Bucks return home to face the Lakers on Thursday night, the final game against a Western Conference team.  The Bucks fell to 2-27 against the West with last night’s loss.