You are here: Home / Archives for Randy Wolf 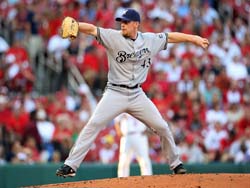 Wolf is in the final year of his contract, but the deal does have a club option for 2013 with a $1.5-million buyout, which the Brewers will obviously have to pay.

Shaun Marcum is scheduled to come off of injured reserve and pitch against the Pirates Saturday or Sunday.  Wolf’s release will allow Marcum to move into the rotation.

Philadelphia’s Kyle Kendrick pitched 3-hit ball for 8-innings and beat the Milwaukee Brewers 8-0 on Sunday.  Kendrick struck out 7 and walked only 1 in the win.

Randy Wolf (3-10) took the loss for the Brewers.  He allowed 5-runs on 10-hits in 7-innings of work.  Wolf has dropped 4-straight decisions, the second time this season he’s reached that mark.

The Brewers and Phillies split the 4-game series which means the Brewers are 8-1-2 in the last 11 home series.

The Brewers open a 3-game home series against the Chicago Cubs at Miller Park tonight.  Mark Rogers (0-1) goes for the Brewers.  Justin Germano (2-2) goes for the Cubs.

The Colorado Rockies jumped on Milwaukee Brewers starter Randy Wolf for 4-runs in the first inning and held on for a 8-6 win at Coors Field last night.

For the second straight night, the Rockies banged out 15-hits on their way to victory.  Carlos Gonzalez led the way with 4-hits and Eric Young Jr. homered for the Rockies.

The Brewers made it interesting late, scoring 3 runs in the 9th inning.  Rockies reliever Rafael Betancourt was able to get Rickie Weeks to pop out and Ryan Braun to fly out to end it.

Mark Rogers pitches the series finale for the Brewers this afternoon.

It’s too little, too late for the Milwaukee Brewers, but they’re starting to play like most thought they could at the start of the season.

Ryan Braun broke an 0-for-18 slump with an 8th inning RBI double to lead the Brewers to a 3-2 come-from-behind win over Cincinnati, sweeping the Reds in the 3-game series.

AUDIO: Ron Roenicke on the win :09

The sweep of the Reds comes after the Brewers were swept last weekend by the Cardinals. END_OF_DOCUMENT_TOKEN_TO_BE_REPLACED

Rookie right-handed pitcher Joe Kelly broke a 3-3 tie with a run scoring single and the St. Louis Cardinals went on to knock off the Milwaukee Brewers 9-3 at Busch Stadium in St. Louis.

His first-pitch RBI single to left off of Randy Wolf (3-8) capped a 4-run outburst by the Cardinals in the fourth inning.

The Brewers scored 3-times in the second inning, jumping out to a 3-0 lead.  Wolf drove in two runs with a bases-loaded single.

Ryan Braun, who entered the game with a NL leading 29 home runs, had three hits including a pair of doubles, but the Brewers tied a season high with four errors, including the first in 51 games at first base for Corey Hart.

Game two of the series is tonight.  Mark Rogers makes his second start of the season for the Brewers.  The Cardinals will go with veteran Adam Wainwright.

Randy Wolf’s streak of 13-starts without a victory came to an end Tuesday night as the Brewers knocked off the St. Louis Cardinals 3-2 at Miller Park.  The last time Wolf earned a win was April 30th.

Wolf lasted 6 2/3 innings allowing 2-runs on 8-hits with 6 strike-outs.  He left the game in the hands of Jose Veras with 2-outs in the 7th and runners on 2nd and 3rd.  Veras got Cardinals SS Rafael Furcal to pop ending the threat.  Manny Parra struck-out a pair and gave up nothing in a scoreless 8th frame.  Francisco Rodriguez had a shaky 9th allowing a couple of hits but got out of the jam and notched his 2nd save of the year.  Rodriguez wanted to make sure Wolf got the win…

AUDIO: Francisco Rodriguez says it was big to get Wolf the win :13  END_OF_DOCUMENT_TOKEN_TO_BE_REPLACED

For the 6th time in 22-chances this season, John Axford entered the game with Brewers leading and he couldn’t hold on.  Milwaukee fell to the St. Louis Cardinals 3-2 Monday night at Miller Park.  Axford gave up all three runs with two-outs.

Axford started the inning by walking Matt Carpenter before getting Lance Berkman and Carlos Beltran to fly out.  Rafeal Furcal then had an infield single followed by another Axford walk, this time to Skip Schumacker.  Matt Holiday then connected on a 2-RBI single followed by an Allen Craig blooper for the game winner before Kameron Loe came in to get the final out.  Axford called it his worse outing of the season…

END_OF_DOCUMENT_TOKEN_TO_BE_REPLACED

Just one day after the Milwaukee Brewers scored 16-runs against the Minnesota Twins, they put up just 3 runs on 6-hits in a 4-3, 14-inning loss to the San Francisco Giants at Miller Park.

The Giants got 3-runs in the first inning on Buster Posey’s 3-run homer off of Randy Wolf.  They wouldn’t score again until the 14th inning when backup catcher Hector Sanchez clubbed a leadoff homer off of left-hander Juan Perez.

Ryan Braun hit a 2-run homer in the 8th to tie the game at 3 and send it to extra innings.  But the Brewers had nothing from that point moving forward.  Braun had to leave the game after a 10th inning ground out after his groin tightened up on him.

The Brewers and Giants play game 2 of their series tonight.