You are here: Home / Archives for Richard Rodgers

Rodgers departure leaves the Packers with just two tight ends with any appreciable NFL playing time.  Veteran Jimmy Graham signed a three-year deal in March and Lance Kendricks is back for a second season after signing as a free agent prior to last season.

Rodgers played in all but one game during his four years with the Packers.  He finished with 120 receptions for 1,166 yards and 13 touchdowns.

Rodgers career highlight came in 2015 when he caught a Hail Mary pass against the Detroit Lions at Ford Field in a must win game for the Packers.  That 2015 season was his best as Rodgers caught 58 passes for 510 yards and eight touchdowns.

The Green Bay Packers placed second-year offensive tackle Jason Spriggs on injured reserve on Tuesday because of a knee injury that he suffered on the first play from scrimmage in last Saturday night’s 16-0 loss to the Minnesota Vikings.

Packers coach Mike McCarthy told reporters on Sunday that Spriggs had suffered a series injury.  Spriggs had taken over at right tackle after the Packers lost Bryan Bulaga for the season with injury.

With a roster spot available and another injury to tight end Richard Rodgers on Saturday’s game, the Packers signed rookie tight end Emanuel Byrd to their 53-man roster by calling him up from their practice squad.

Byrd is expected to back up Lance Kendricks on Sunday’s season finale against the Lions in Detroit.

It didn’t take long for Martellus Bennett to find a new home.  After Bennett was released by the Green Bay Packers on Wednesday, he was claimed by the New England Patriots on Thursday.

The Packers released Bennett with a designation of “failure to disclose a physical condition.”  He can join the Patriots immediately.

Last season, Bennett played for the Patriots, catching 55 passes for 701 yards and seven touchdowns and helping them win the Super Bowl.

Bennett told the Packers before he was released that he had a shoulder injury and he wouldn’t be able to play again this season.  If the Patriots pass him on his physical and he does play for them, then the Packers will have a real solid case in terms of recouping some of the signing bonus money already paid to him.

The Packers gave Bennett a $6.3 million signing bonus.  The prorated portion that is left is $4.2 million.

Bennett’s intentions will be made much more clear if he plays for the Patriots this season.  If that happens, then it will look like he quit on the Packers and jumped ship as soon as Aaron Rodgers was lost with an injury.  If he doesn’t play or doesn’t even pass his physical, then one is more inclined to believe the actual injury is legit.  Time will tell.

Bennett’s departure from Green Bay leaves them with two tight ends at the moment.  They’ll go with Richard Rodgers and Lance Kendricks.

The Green Bay Packers didn’t reach a deal with Jared Cook after last season and nobody is really sure how hard they tried.  Cook went on to sign with the Oakland Raiders and currently has 39 catches for 499 yards (12.8 ypc) and one touchdown in his first nine games.

The Packers instead, signed Martellus Bennett to a three-year deal worth $21 million.  But Bennett’s time in Green Bay ended on Wednesday when the Packers released him, just eight games into the season.  The Packers cited a failure to disclose a physical condition.

Bennett was listed on the injury report last week with a shoulder injury.  The injury was something Mike McCarthy said he didn’t know about until after practice on October 31.  That practice just happened to be three days after Bennett announced on his Instagram account that he is considering retirement at the end of the season.

By claiming Bennett failed to disclose a physical condition, the Packers are saying Bennett didn’t inform them of a previous injury before signing his three-year deal with the team.  It sets up the possibility that the Packers will try to recoup a portion of the signing bonus the Packers paid him. END_OF_DOCUMENT_TOKEN_TO_BE_REPLACED

The 28-year-old Cook gives the Packers a deep threat that was missing from the passing game during the last season.  He was clocked at 4.51 seconds coming out of college. END_OF_DOCUMENT_TOKEN_TO_BE_REPLACED 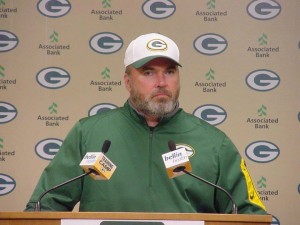 To most of us, the Green Bay Packers final play in their 27-23 come-from-behind win over the Detroit Lions is referred to as a “Hail Mary”.  Mike McCarthy calls it a “Rebound Pass”.

The Packers got new life when the Lions were called for a facemask penalty against Aaron Rodgers.  It gave the Packers one more play with no-time on the clock. END_OF_DOCUMENT_TOKEN_TO_BE_REPLACED

Green Bay Packers guard T.J. Lang was punished for his role in a scuffle during last Sunday nights game against the Seattle Seahawks at Lambeau Field.

Packers tight end Richard Rodgers was on the ground, tussling with linebacker K.J. Wright when Lang came to Rodgers defense.  Lang knocked Wright off of him.

Lang and Wright both received unsportsmanlike conduct penalties and Wright was ejected from the game.

On Wednesday, Lang posted on Twitter:  “$8,681.  Price of defending your teammate in the NFL.”

The NFL doesn’t comment on fines until the Friday following a game.  There’s no word from Lang on whether or not he will appeal the fine.

The Packers sealed their victory with a one-handed interception by Jayrone Elliott.   Then Elliott forced a fumble that was recovered by Micah Hyde with 22 seconds left to play. END_OF_DOCUMENT_TOKEN_TO_BE_REPLACED 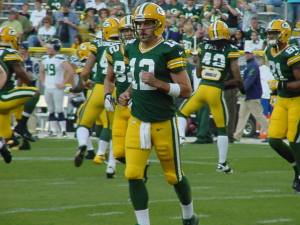 The Green Bay Packers season started in Seattle way back in week 1 of the NFL season and it started with a 36-16 loss.  Now, after coming from behind to knock off the Dallas Cowboys 26-21 in the NFC Divisional Playoffs, the Packers are hoping their season doesn’t end in Seattle, in the NFC Championship game.

Mike McCarthy’s Packers are in the NFC Championship game for the third time under McCarthy.  The first came in 2007, McCarthy’s second with the Packers.  The Packers fell to the Giants 23-20.  The second NFC Championship appearance came in the 2010 season when the Packers beat the Bears 21-14 before moving on to beat Pittsburgh 31-25 in Super Bowl XLV.

Aaron Rodgers got off to a slow start in the first half, passing for 90 yards and a touchdown, but the Packers trailed 14-10 at halftime.

The second half was a different story, as Rodgers found ways to be a bit more mobile, moving around to complete 15 of 20 passes for 226 yards and two second half touchdowns.  He finished with 316 yards and three touchdowns on the day. END_OF_DOCUMENT_TOKEN_TO_BE_REPLACED