You are here: Home / Archives for Ricky Weeks 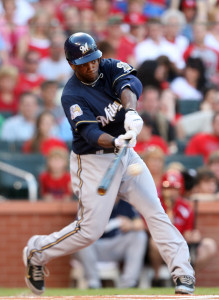 Seattle Mariners GM Jack Zduriencik selected second baseman Rickie Weeks with the 2nd overall pick in the 2003 Draft while Zduriencik was with the Milwaukee Brewers.  Now, Zduriencik is giving Weeks another chance.

ESPN’s Jim Bowden is reporting that Weeks will sign a 0ne-year deal worth $2 million with another $2 million in incentives.

The 32-year-old Weeks lost his starting job at second base to Scooter Gennett last season in Milwaukee.  Weeks played primarily against left-handed pitchers and hit .274 with eight homers and 29 RBI in 286 at-bats.

The Brewers had an $11 million option for 2015 on Weeks but didn’t exercise it.

Weeks is likely to serve as a backup at a couple of different positions in Seattle.  They already have Robinson Cano at second base and Nelson Cruz is their DH.

The Milwaukee Brewers won their cactus league game yesterday, a 6-1 victory over

While the umpires were changing out equipment, the game moved on with Tim McClelland calling pitches from behind the mound.  That scenario lasted for four batters before the umpires were able to return to a 3-man crew.

The Brewers are back at it today, facing the San Francisco Giants in Scottsdale.  Chris Narveson will make the start for the Brewers.