You are here: Home / Archives for Rutgers Scarlet Knights

Trice scored eight points and assisted on another basket during a 12-0 Wisconsin run to give the Badgers a 54-44 lead and create some separation from what was a back and forth struggle in the second half.

The Badgers let by as many as 10 points in the first half, but the Scarlet Knights cut the lead to one (33-32) at halftime.

It was a good bounce back win for the Badgers, after their blowout loss at Michigan on Tuesday.

The Badgers return to action on Wednesday night against Northwestern in Madison.  Rutgers is at Penn State on Thursday.

Nathan Reuvers and Brevin Pritzl added 17 points each and Brad Davison added 15 points, including his END_OF_DOCUMENT_TOKEN_TO_BE_REPLACED

Rutgers held a 22-10 edge in points off turnovers and 23-5 edge in second-chance points.

The Badgers started Big Ten play with a 20-point win over Indiana last Saturday, but they couldn’t keep that momentum going on the road.  Wisconsin is now 0-5 on the road this season.  They’re 5-5 overall, 1-1 in the Big Ten.

Kobe King had 18 points on 7 of 12 shooting to lead the Badgers.  Trevor Anderson added 11.  King had 24 points to lead the Badgers in the Big Ten opener against Indiana.  But Wisconsin’s leading scorer, Nate Reuvers, hit just 2 of 8 shots and finished with six points.

The Badgers fell behind 9-0 to start but battled their way back and took a 1-point halftime lead.  Rutgers jumped back in front in the second half and never trailed the rest of the way.

The Badgers are off until a week from Saturday against UW-Milwaukee at the Kohl Center.  The Badgers will get transfer Micah Potter back for that game, his first game action as a Badger.

For the third straight game, the Wisconsin Badgers needed a strong second half to win and that’s what happened again Monday night.

Wisconsin trailed by as many as 10 points in the first half and five points at halftime before rebounding for a 69-64 win over the Rutgers Scarlet Knights in Big Ten action at the Kohl Center.  The Badgers improved to 8-1 on the season, their best start since starting 15-1 to begin the 2014-15 season.

After a good first half, the Badgers clamped down defensively in the second, holding Rutgers to 40.6% shooting from the field.

The Badgers get a day off on Tuesday.  Their next game is Saturday against the rival Marquette at Fiserv Forum. 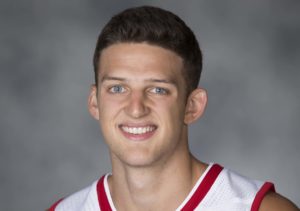 Wisconsin led 33-18 at halftime and went up by 21 midway through the second half before Rutgers put together a rally.  But the Badgers pulled away down the stretch, running their END_OF_DOCUMENT_TOKEN_TO_BE_REPLACED

The 14th-ranked Wisconsin Badgers wrapped up exam week and went out and crushed Florida A & M in their final non-conference tune-up, 90-37 at the Kohl Center.

Thirteen players scored for the Badgers, led by freshman guard D’Mitrik Trice, who hit 4 of 5 three-pointers and finished with 14 points.  Trice improved to 18 of 30 (60%) from three-point range this season.

The Badgers improved to 11-2 and now will open Big Ten play on Tuesday night against Rutgers.  The Scarlet Knights are also 11-2, coming off a 72-61 loss on Friday night against Seton Hall.