You are here: Home / Archives for Ryan Groy

The honors continue to keep piling up for Wisconsin senior linebacker Chris Borland.

He was named first-team All-America by the Football Writers Association of America, joining Alabama’s C.J. Mosley and Buffalo’s Khalil Mack at linebacker.

Borland is the first defensive player from Wisconsin to earn first-team All-America laurels since defensive end Erasmus James in 2004.

In addition to his first-team nod from the FWAA, Borland earned second-team All-America honors from the Associated Press, Athlon, CBS Sports and Sports Illustrated.

Borland, who  was named the Big Ten’s Defensive Player of the Year, leads Wisconsin with 64 solo tackles and 102 total tackles.  His 8 1/2 tackles for loss is also a team high.

Teammate and offensive lineman Ryan Groy, was named to the third-team.  Groy was a first-team All-Big Ten pick by the coaches and second-team by the media.

Several members of the Wisconsin football team are scheduled to participate in “Shave to Save” on Thursday at noon in the Wisconsin locker room.

The purpose for the event is to raise awareness for childhood cancer research at American Family Children’s Hospital.

Jared Abbrederis, Jacob Pederson and Ryan Groy are among the players set to have their heads shaved.

Patients from the American Family Children’s Hospital will do the honor of shaving the players heads. 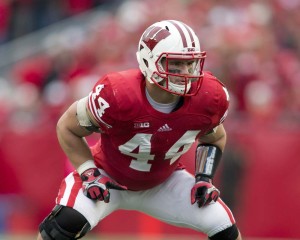 for five different awards after the Lombardi and Butkus Awards announced their watch lists on Monday.