You are here: Home / Archives for SEC

The Milwaukee Brewers have signed their first round draft pick, left-handed pitcher Ethan Small, who was selected by the team out of Mississippi State University in the first round (No. 28 overall) of the 2019 First-Year Player Draft.

The 22-year-old Small went 10-2 with a 1.93 ERA (107 innings pitched, 23 earned runs), 176 strikeouts, a 0.87 WHIP and a .164 opponent batting average across 18 starts this season as a redshirt junior with the Bulldogs.  Small helped lead the Bulldogs to their 11th appearance in the College World Series.

Small recorded double-digit strikeouts on 11 occasions on the way to establishing a new single-season program record and leading all NCAA Division 1 pitchers in strikeouts.  He finished the regular season third in the Southeastern Conference (SEC) in ERA and ranked among Division 1 leaders in WHIP (2nd, 0.80) and ERA (13th).

Small was named the 2019 SEC Pitcher of the Year.  He earned First Team All-SEC honors and was named a First Team All-American by the American Baseball Coaches Association (ABCA).  He finished 16-6 with a 3.05 ERA and 318 strikeouts across 36 starts in three seasons as a Bulldog, becoming just the sixth Mississippi State pitcher with multiple 100-strikeout campaigns and the third to record 300 career punch outs.

With the signing of Small, the Crew has now agreed to terms with 22 of their 39 selections from the 2019 First-Year Player Draft.

Nobody in Madison or the state of Wisconsin for that matter saw this coming.  It’s tough to call anyone a lifer these days, but Bret 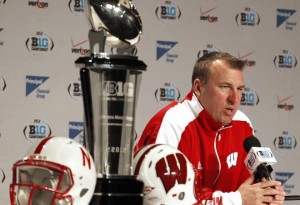 Bielema appeared to be quite entrenched with his position in Madison.

Bielema referred many times to his upcoming 2013 class on paper as perhaps his best ever.  So the Badgers stand to be better next season.

Throw in the fact that Bielema hates everything the SEC stands for.  Now he’s trading in his cowhide boots for the snake-skin variety down in SEC country.

Bielema complained of Urban Meyer’s (Ohio State head coach) recruiting tactics, and how after a little more than two months on the job, Meyer has already gotten under the skin of his new Big Ten colleagues.  Bielema even went as far as saying in his National Signing Day press conference that Meyer was using “illegal” recruiting practices.  He echoed those thoughts to The Sporting News. END_OF_DOCUMENT_TOKEN_TO_BE_REPLACED