You are here: Home / Archives for Steve Wojciechowski 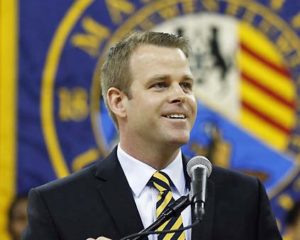 Marquette won 23 games during the regular season and finished second in the Big East, but the Golden Eagles lost six of their last seven.

After guard Markus Howard announced in early April that he was returning for his senior season, brothers Sam and Joey Hauser announced that they were leaving the program.

Despite the fact that Wojciechowski has led the Golden Eagles to three straight postseason tournaments, they’re 0-2 in NCAA Tournament games.  Marquette did win a pair of games in the 2018 National Invitation Tournament.

A pair of victories last week for the Marquette Golden Eagles is catching people’s attention.  Riding a three-game winning streak, the Golden Eagles (14-3, 3-1 Big East) moved up six spots on Monday in both Top 25 polls.

Marquette climbed to 13th in the USA Today Coaches Poll and 15th in the Associated Press writers poll.

The rankings are the highest since Steve Wojciechowski’s took over (fifth season).  It’s also the highest the Golden Eagles have been ranked since they were No. 11 in the coaches poll and No. 12 in the AP poll during the 2012-13 season under Buzz Williams.

Marquette shoots for its fourth straight win on Tuesday night when they face Georgetown (12-5, 2-2) in Washington D.C.

When the NCAA was handing out tournament bids on Sunday night, the Marquette Golden Eagles were left out.

Instead, Marquette will face Harvard in the first round of the National Invitation Tournament (NIT) on Wednesday (6 p.m.) at the Al McGuire Center.  The game will be televised on ESPN2.

Marquette (19-13) had a number of moments during the season where they couldn’t afford to slip and they did.  Regular season losses at St. John’s and DePaul were back-breakers.

To their credit, the Golden Eagles did have quality road wins against Creighton, Seton Hall and Providence, but as it turned out, Marquette wasn’t even one of the first four teams left out of the NCAA tournament field.  That distinction belonged to Baylor, Notre Dame, Saint Mary’s and Southern California.

The last time Marquette played a game in the NIT was March of 2005 when they fell to Western Michigan 54-40.

The tournament will experiment with new rules this season, including an extended three-point line, four quarters instead of two halves, a 20-second shot clock after offensive rebounds and a wide free-throw lane.

AUDIO: Steve Wojciechowski on the new rules for the tournament :23

AUDIO: Steve Wojciechowski said his players are excited about the opportunity :15

The Golden Eagles (19-13) got 23 points from Markus Howard and 22 from Andrew Rowsey in the loss.

Marquette will now sit and wait to see if their record, as well as the strength of the Big East Conference will be enough to get them into the NCAA Tournament.  It would seem unlikely, but the Golden Eagles will stay prepared for whatever postseason tournament comes calling.