You are here: Home / Archives for Tionna Williams

For the sixth-straight season, the 8th ranked Wisconsin women’s volleyball team has advanced to NCAA Regional play.  The sixth-seeded Badgers advanced by knocking off Pepperdine 25-16, 25-12, 15-25, 25-13 on Friday night at the UW Fieldhouse.

Sophomore Sydney Hilley recorded her seventh double-double in the last eight matches with 48 assists and 19 digs, which ties her career best.

Wisconsin advances to regional play on Dec. 7-8 at a location to be determined.  The highest remaining seed will host the regional tournament.

The fifth-ranked Wisconsin volleyball dropped its first Big Ten match of the season, falling to sixth-ranked Minnesota on Wednesday night in three sets, 25-17, 25-21, 25-15.

Sophomore Dana Rettke earned a team-best 12 kills while adding three digs, an ace and a block.  Grace Loberg and Tionna Williams combined for three blocks as the Badgers earned a slight 4-3 advantage at the net.

The Badgers are back on the road this weekend, traveling to West Lafayette, Indiana, on Saturday for a 6 p.m. match against Purdue.

The eighth-ranked Wisconsin volleyball team captured the HotelRED Invitational after knocking off High Point Sunday night at the UW Field House.  The Badgers dropped the first set but won the next three, 23-25, 25-20, 25-21, 25-17, to hand the Panthers their second loss of the day.

The Badgers recorded a season-high 17 blocks led by middle blockers Dana Rettke and Tionna Williams with nine and eight respectively.

The Badgers knocked off second-ranked Texas just one day earlier.

Wisconsin sold out their second straight match of the season at 7,052 fans in attendance, which ties for fifth on UW single-match attendance list.  Wisconsin has sold out the Field House 14 straight times.

The Huskers (19-1 Big Ten record in 2017), who shared the 2017 conference championship with Penn State (19-1), are picked to win the Big Ten title this season.  Minnesota (15-5) finished third last season and is picked to finish third in 2018.  The Nittany Lions are ranked fourth while Illinois (12-8) is expected to finish fifth this season after tying for fifth with Purdue in 2017.

The Badgers landed two players on the preseason team, including unanimous selection Dana Rettke.  The 6’8 middle blocker was named the 2017 National Player of the Year by three separate organizations and was also named the 2017 Big Ten Freshman of the Year.  Senior Tionna Williams, a two-time All-Big Ten selection, was also named to the preseason All-Big Ten team for the second-straight year.

Wisconsin hosts its annual Red vs. White Scrimmage on Saturday at 1 p.m. in the UW Field House.  The season opens on Aug. 24-25 at the Big Ten/ACC Challenge in the Target Center, the site of the 2018 NCAA Championship, in Minneapolis.  The Badgers host No. 3 Texas in their home opener on Sept. 1 in the Field House.

Wisconsin volleyball standout Dana Rettke continues to reel in the awards.  Rettke became the first Badger volleyball player to be named National Freshman of the Year by the American Volleyball Coaches Association.  She also becomes the first freshman in UW history to earn first-team All-America honors.

Rettke led the Badgers and ranks second in the Big Ten with a .443 hitting percentage.  She also led the team and ranks 10th in the conference with 3.42 kills per set.  The freshman had a team-best 1.37 blocks per set, which ranks third in the Big Ten.  Rettke also ranks second on the team with 25 service aces (0.22 per set).

Top-seeded Penn State and fifth-seeded Nebraska will compete in the Final Four semifinals in women’s college volleyball in Kansas City tonight.  The Nittany Lions take on the Huskers at 7 p.m. (CT) tonight.  The winner will advance to the National Championship match on Saturday and face the winner of tonight’s other semifinal match between Florida and Stanford.

The Wisconsin Badger women’s volleyball team had two players named to the 2017 All-Big Ten team.  A pair of middle blockers, junior Tionna Williams and freshman Dana Rettke were both named to the squad.

Rettke and teammate, setter Sydney Hilley were named to the All-Freshman team.

Rettke, after setting a Big Ten Conference record with nine Freshman of the Week awards, was named the Big Ten’s Freshman of the Year.  The 6’8 middle blocker becomes the fifth Badger to earn the rookie honor, following teammate Molly Haggerty, who was honored in 2016.  Her selection to the All-Big Ten team was unanimous.

On the season, Rettke leads the Badgers and ranks second in the Big Ten with a .445 hitting percentage.  She also leads the team and ranks 13th in the conference with 3.37 kills per set.  The freshman has a team-best 1.42 blocks per set, which ranks third in the Big Ten.  The Riverside, Illinois native leads all Big Ten freshmen in hitting percentage and blocks per set while ranking third in kills per set. END_OF_DOCUMENT_TOKEN_TO_BE_REPLACED 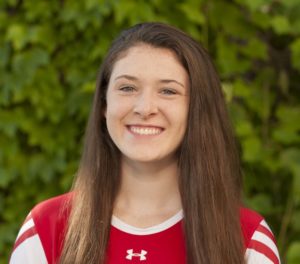 The Nittany Lions put up 14 blocks to Wisconsin’s nine.  Setter Sydney Hilley and Williams lead the team with five stuffs each.

The Badgers return to the UW Field House on Saturday for a match with Northwestern at 7 p.m.

AUDIO: Kelly Sheffield said they made too many mistakes :16

Haggerty guided the sixth-ranked Badgers to victories over second-ranked Texas and 16th-ranked Texas A & M, averaging 5.9 kills per set and posting a .387 hitting percentage on the week.  Haggerty was named the Big Ten’s Freshman of the Week, the second time in her career she’s done so.

The Badgers are 7-1 on the season and will open Big Ten play this Friday night against 19th ranked Ohio State at the UW Field House. 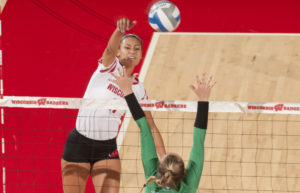 Williams helped the second-ranked Badgers to a pair of wins over No. 18 San Diego and Texas A & M-Corpus Christi.

For the week, Williams averaged 2.2 blocks per set and recorded a total of 11 total blocks in just five sets.

The Badgers are off to a 5-0 start after winning the HotelRED Invitational this past weekend in Madison.