You are here: Home / Archives for Turner Botz

Little Chute boys basketball standout has verbally committed to the 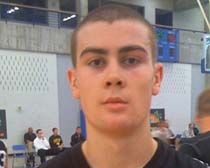 Botz averaged 19.2 points a game as an honorable mention all-state selection as a junior last season.