You are here: Home / Archives for USCHO.com

The Minnesota Gophers start the new year ranked number-one in this week’s USCHO.com Division 1 Men’s Hockey Poll.  The Gophers are off to a 9-0 start, earning 39 of 40 first-place votes in this week’s rankings.

The Gophers will travel to Madison, Wisconsin for a pair of Big Ten contests against the rival Wisconsin Badgers (5-5), who are ranked fifth in this week’s poll.

The only other Big Ten team in the top 15 is Michigan.  The Wolverines dropped one spot to ninth.

St. Cloud is number-6, Bowling Green is No. 7, Massachusetts is No. 8 and Clarkson sits tenth.

The Wisconsin men’s hockey team capped the 2017 portion of their schedule ranked 13th in the USCHO.com Division I men’s poll.

The Badgers dropped one spot from 12th after suffering back-to-back home losses to then-No. 4 Notre Dame over the weekend.

The Badgers will face the Nittany Lions after the holiday break, playing a pair of games Jan. 5-6 in State College, Pennsylvania.

St. Cloud took over the top spot in the rankings after Denver dropped to second with a pair of ties against Colorado College.

The Badgers stayed in the top spot Monday after sweeping all 15 first-place votes in this week’s poll.

The Badgers (14-0) swept previously unbeaten Ohio State 7-0 and 3-1 last weekend at LaBahn Arena in Madison.  With their first two losses, the Buckeyes dropped from fourth to fifth in this weeks poll.

Boston College (8-0-1) is number two this week.  The Eagles are the only other team in women’s college hockey without a loss.

The Badgers hit the road this week, playing at number 7 Cornell on Friday and Saturday.

The Wisconsin hockey team lost and tied its two games with second ranked North Dakota over the weekend but the Badgers didn’t lose any ground in the USCHO.com poll.

St. Cloud State took over the top spot after defending national champion Denver was swept over the weekend by Western Michigan.

The Badgers return to Big Ten action this weekend when they face Michigan State (4-4) in East Lansing. 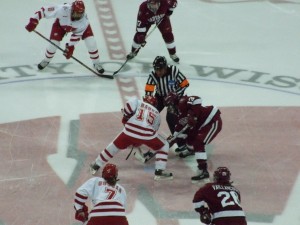 The Wisconsin Badger women’s hockey team will open its season this weekend at Lindenwood, and they will do so ranked as the No. 2 team in the country, according to the USCHO.com Division 1 women’s poll announced this week.

After finishing last season third in the polls behind national champion Clarkson and WCHA-rival Minnesota, the Badgers trail only Minnesota in this season’s first edition of the polls, garnering 117 points to Minnesota’s 146.

Ranked second in the country, it marks the Badgers’ highest preseason ranking since 2012 when UW was also picked No. 2.  Wisconsin has started 10 of its past 11 seasons ranked in the top-five of the USCHO.com poll.

The Badgers face Lindenwood for a two-game series this weekend, beginning Friday at 7 p.m. and then wrapping up Saturday at 3 p.m. in Wentzville, Missouri.