You are here: Home / Archives for UW-Eau Claire

Platteville, Eau Claire and St. Norbert College all received at-large bids, based on their work during the season and conference tournaments.

Opening round games will be held Friday, with the winners advancing to second round action on Saturday. 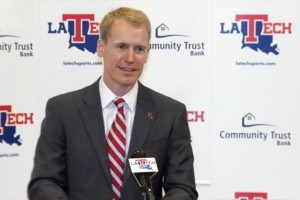 One of the best basketball players to ever come out of Amherst, Wisconsin, is now in charge of his own hoops program.

On Monday, Eric Konkol was introduced as the new head men’s basketball coach at Louisiana Tech University. For Konkol, the move means he’ll be a head coach for the first time in his career.

Konkol was one of the most decorated prep stars from Amherst, holding several school scoring records. Following high school, he went to play for Bo Ryan at UW-Platteville, joining the team a season after they won the national title in 1995. Following the 1997 season, he transferred to WIAC rival UW-Eau Claire and played through his graduation in 2000.

Once his playing days were over, Konkol immediately got into the coaching side of basketball, holding assistant positions at Tulsa, Tennessee, North Dakota State, George Mason, and Miami.

Konkol takes over a Bulldogs team that went 27-9 last season and reached the quarterfinals of the NIT. He replaces Michael White, who left the program to take the same position at the University of Florida.

AUDIO: Konkol says playing in the NCAA Tournament is among the many goals for the Bulldogs :11

AUDIO: Konkol thanks the many people who have supported him :23

UW-Oshkosh ended a 15-game losing streak against 4th-ranked UW-Stevens Point, upsetting the Pointers 50-47 in the semifinals of the WIAC tournament.

Alex Olson hit the go-ahead three-pointer with 1:13 to play that turned out to be the difference.  Charlie Noone sank a pair of free throws in the closing seconds to seal the win.

Oshkosh (16-11) moves on to face UW-Whitewater (23-3) in the WIAC Championship game.  The Warhawks advanced to the title game by rolling to a 82-60 win over UW-Eau Claire.

UW-Whitewater and UW-Stevens Point had byes into the semifinals.

Whitewater is the number-1 seed.  If they beat Eau Claire on Thursday night, they’ll host the championship game on Saturday.  Stevens Point drew the number-2 seed in a coin flip with Whitewater.

After a slow start, top-ranked UW-Whitewater scored 35 straight points on the way to a 45-13 win over Franklin in Franklin, Indiana.

Franklin (0-2) jumped out early, scoring on their first two possessions and led 13-7.

Tyler Tillema had 24 points and Clayton Heuer added 18 points for the Pointers, who improved to 19-0 on the season and 10-0 in conference play.

The Pointers shoot for win number 20 at home against Superior on Saturday.

The Warhawks are the t0p seed in the 8-team, double-elimination field.  They’ll open play at 10am this morning against Finlandia.  The Warhawks are making their 16th post season appearance and fourth in the last six years.

The tournament could last until Monday.  Following is the opening round schedule.

After just one season, Kyle Green has resigned his position as head coach of the UW-Eau Claire men’s basketball team.  Green made the announcement at a news conference this week.

Green led the Blugolds to a 15-10 overall record and a 7-9 mark in the Wisconsin Intercollegiate Athletic Conference (WIAC) this past season.

Green was given the job in May of 2011 after a national search, replacing former coach Terry Gibbons on May 18, 2011 to become the ninth coach in program history.

A nationwide search for Green’s replacement will begin immediately.

The Wisconsin Intercollegiate Athletic Conference (WIAC) has three of its teams make the NCAA Division III men’s basketball tournament which starts this Friday.

UW-River Falls won the WIAC’s automatic bid by winning the conference tournament on Sunday.  UW-Stevens Point and UW-Whitewater also received bids into the field on Monday.  First round games are played on Friday night.