You are here: Home / Archives for Waupaca Comets 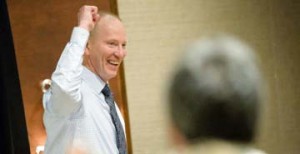 One of the great runs in prep sports is coming to an end.  According to Wisconsin Radio Network affiliate WDUX Radio in Waupaca, long time high school football coaching legend John Koronkiewicz has informed the school that he is stepping down as head football coach.

Koronkiewicz is expected to present his official resignation to the Waupaca Board of Education next week.

The Oconto native has spent 40-years coaching in Waupaca, the last 32 as head coach of the Comets.

Koronkiewicz took Waupaca to five state championship games, winning titles in 2006 and 2008.  The 63-year-old coach wrapped up his football coaching career with a 4-6 record this past season.  His overall record is 265-90 at the school. END_OF_DOCUMENT_TOKEN_TO_BE_REPLACED

Jensen played collegiately at North Dakota State.  He hopes to play in Miami’s preseason opener at Atlanta on Friday night.

For the second time in five years, a Waupaca High School football stand-out has signed a National Letter of Intent to play college 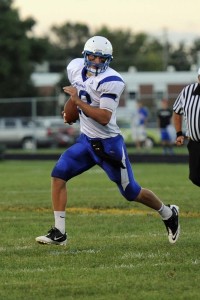 Senior Nate Jenson put his name on the dotted line Wednesday morning in front of family, friends and coaches at Waupaca High School.  The four-year starter played three years at wide receiver before making the transition to quarterback for his senior season.  Now, the 6’6, 225 pound Jenson says his calling at North Dakota State is likely to come at tight end.

Nate Jenson follows former Waupaca quarterback Brock Jensen (no relation) to Fargo, where Brock led the Bison to three straight FCS Championships.  Nate Jenson said his decision wasn’t a tough one to make at all.

Jenson comes from a family of football success.  His two older brothers played on Waupaca state championship teams in 2006 and 2008.  And Nate helped lead the Comets to the state title game in 2012, where they lost to Catholic Memorial.

Jenson’s longtime coach John Koronkiewicz says it’s always special to see one of his players move on to the next level.

AUDIO: Nate Jensen on the plan at NDSU :11

AUDIO: Jensen says this was not a tough choice :15

AUDIO: John Koronkiewicz says it’s special to see one of his players move on to the next level :18

(Thanks to Jack Barry at WDUX / Waupaca for this story)