You are here: Home / Archives for Supreme Court

Republicans have withdrawn a request for the state Supreme Court to rule on the use of new legislative districts in possible state Senate recall elections.

The lawsuit filed November 21st asked the court to appoint a three judge panel to determine if new Republican-drawn legislative districts would apply to recall elections targeting members of the state Senate. Friday’s filing simply states the request to withdraw is due to issues raised by the court.

The Supreme Court had asked for briefs on a number of issues related to the case, including whether it should be delayed until a federal lawsuit questioning the constitutionality of the new maps is resolved. Justices had also requested filings from other groups seeking to intervene in the case.

The announcement came shortly after a report that Justice David Prosser would not participate in any cases this month because of an undisclosed medical condition. Prosser’s absence could have hurt the chances of the lawsuit succeeding.

An almost identical lawsuit is still pending in Waukesha County.

The special prosecutor looking into an alleged physical confrontation between two state Supreme Court justices has decided no charges will be filed.

After reviewing the investigation conducted by the Dane County Sheriff’s Office, Sauk County District Attorney Patricia Barrett says she did not feel there was enough evidence to justify criminal charges. Barrett says she reviewed the case with an eye towards whether she could meet her ethical obligations as a prosecutor in filing charges, and did not feel she could do so. END_OF_DOCUMENT_TOKEN_TO_BE_REPLACED

A state lawmaker is pushing for a change in how the chief justice of the state Supreme Court is selected. The position is currently filled by the member of the court who has served the longest, but a proposed constitutional amendment from state Representative Tyler August (R-Walworth) would have the court vote on its leader instead.

August, a freshman lawmaker from Walworth, says he believes it’s much more appropriate to have justices deciding who should lead the court, rather than just assuming the person who has been there the longest is the most qualified to do the job. END_OF_DOCUMENT_TOKEN_TO_BE_REPLACED

The State Supreme Court says a Dane County Judge overstepped her authority in halting the Governor’s controversial collective bargaining law. In a 4-3 decision, Justices ruled Judge Maryann Sumi did not have the power to stop a law stripping away the collective bargaining rights of many state workers from taking effect.

Judge Sumi had blocked implementation because of arguments that Republicans violated the open meetings law during passage of the bill. Sumi’s order had prevented Act 10 from being published, which stopped the state from deducting higher pension and benefit contributions from state employee’s paychecks. END_OF_DOCUMENT_TOKEN_TO_BE_REPLACED

The state Supreme Court has ordered American Transmission Company to pay a Weston couple’s legal fees in a condemnation dispute. The high court on Thursday issued a decision agreeing with a Marathon County judge who said Mark and Jeanne Klemm were entitled to recover $22,000 in legal expenses. An appeals court had reversed the circuit court decision.

Chief Justice Shirley Abrahamson wrote in the court’s unanimous decision that nothing in state law banned landowners like the Klemms from recovering legal fees if they accept a negotiated offer instead of a jurisdictional offer. END_OF_DOCUMENT_TOKEN_TO_BE_REPLACED

The state Supreme Court has ruled that a teen murderer was properly sentenced to life in prison without parole, and that such a sentence is not unconstitutional, cruel, or excessive. The decision comes from the appeal of Omer Ninham, who was convicted of first degree intentional homicide for the 1998 death of a 13-year-old boy and given a life sentence.

Ninham, who was 14 at the time, was part of a group of teens who attacked Zong Vang and chased him to the fifth floor of the St. Vincent’s parking garage in Green Bay. END_OF_DOCUMENT_TOKEN_TO_BE_REPLACED 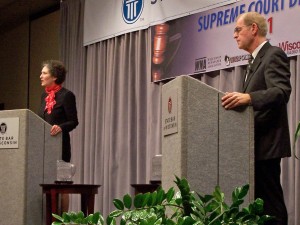 The growing partisan tone of the state Supreme Court race took center stage at a debate Monday night in Madison. The two candidates, incumbent Justice David Prosser and Assistant Attorney General JoAnne Kloppenburg, faced off in a forum at the State Bar of Wisconsin.

Prosser warned that the millions of dollars being spent by third party groups puts the judiciary at risk. He says the ads could destroy judicial independence and take away the votes of the people of Wisconsin.

Prosser has been subject to ads critical of his time on the bench and that attempt to draw comparisons between him and Republican Governor Scott Walker. Prosser, a former Republican lawmaker, argued he has tried to be in the center during his 12 years on the bench.

Kloppenburg defended the rights of groups to run attack ads, even if the candidates disagree with the content. She says there’s no evidence her campaign has attempted to coordinate with those organizations and their speech is protected. Kloppenburg says the candidates have no control over what those groups put on the air.

Prosser says the campaign is one of the most politicized court races in state history and people are not looking at the qualifications of the candidates. He says the race has become a referendum on the wrong subject and people are supporting his challenger based on the perception that she’ll rule against the policies of the Governor.

Kloppenburg says voters are turning to her because they think she’ll be an independent voice on the court that will help restore integrity.

The two candidates will meet in one more debate before next Tuesday’s election.

The state Supreme Court is being asked to decide a challenge to the lawsuit stopping implementation of the budget repair bill. The 4th District Court of Appeals on Thursday said the state Supreme Court should decide if a restraining order blocking the Secretary of State from publishing the law should be allowed to stand. END_OF_DOCUMENT_TOKEN_TO_BE_REPLACED

Voters head to the polls this Tuesday to help narrow down the field in a state Supreme Court race.

Incumbent Justice David Prosser faces three challengers on the primary ballot, as he seeks a second ten-year term on the Supreme Court. The judicial conservative says his experience on the bench should make him a good choice for voters. Prosser believes he has been a quality and impartial justice on the court. END_OF_DOCUMENT_TOKEN_TO_BE_REPLACED

The state Supreme Court is considering the case of a teen sentenced to life in prison without parole for murder. Justices heard oral arguments Wednesday in the case of Omer Ninham, who was convicted of first degree intentional homicide for the 1998 murder of a 13-year-old boy.

Ninham was 14 when he and a group of friends chased their victim to the top of a parking ramp in Green Bay, then dangled him over the edge and dropped him to his death. END_OF_DOCUMENT_TOKEN_TO_BE_REPLACED