You are here: Home / News / Alderman wants city out of Halloween 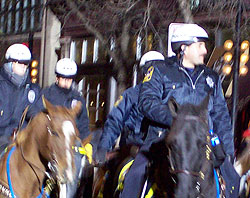 A Madison alderman says this year's Halloween on State Street may have been a success, but he still wants the city to back away from the annual celebration.

Zach Brandon says a sponsor for the event needs to be found to take the celebration "off the city's hands." Brandon says, while the city has shown the party can be violence-free, now a private sponsor should step forward.

Brandon is worried about the city's liability for running the show. He also says this year's party will cost taxpayers hundreds of thousands of dollars, even though revelers were charged a five dollar admission fee.