You are here: Home / News / Boskoff searchers pulled off mountain 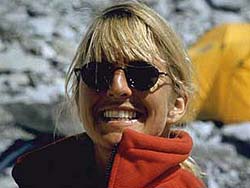 Search crews in China have called off the search for the body of climber, and Appleton native, Christine Boskoff. Boskoff and her partner Charlie Fowler are believed to have been killed in an avalanche. Dave Jones, a director of Boskoff's mountain climbing business, Seattle based Mountain Madness , says searchers were called off the mountain Thursday due to dangerous conditions. "That is a dangerous area for the rescue workers," said Jones. "It has been snowing in the area for the last day, with no sign of letting up, and that dramatically increases the risk for more avalanche."

Jones says searchers may not return for months. "We are completely committed to recovering Chris' body," said Jones. "If the weather does not permit us to do so right now, then we will be returning in the spring."

Fowler's body was found earlier this week. Boskoff's is believed to still be on the mountain, buried in the avalanche.