You are here: Home / Sports / He's my "Little Gretzky"

Being a "Sports Dad" is challenging, nerve racking, gratifying and requires a great deal of patience.  But the rewards are unbelievable. 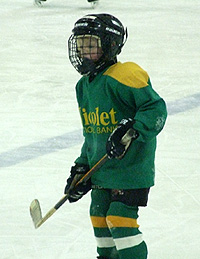 My son Alex, is a young "Mite" hockey player in the De Pere Youth Hockey Association.  The league consists of 7, 8 and 9 year olds.  My son started the season as a 6-year old and turns 7 in January.

When he first took the ice for tryouts in early fall, he was like most 6-year olds, a fish out of water.  Alex was willing and able, but as you can imagine, his skills needed plenty of developing.  I'll be honest, I didn't think he'd score a goal all season.

Not only did he prove me wrong, but he lit the lamp in the first half of the season.  Last Saturday, he found the back of the net and got 4 or 5 more opportunities.  Clearly, the light bulb has gone on.  The De Pere Youth Hockey Association is doing a wonderful job with the young boys and girls in terms of developing their skills and my son is enjoying himself greatly.

The look on his face as he skated back towards the center face-off circle.  He looked at me with such a proud smile.  It was very emotional, at least for me.  I returned the proud smile.  I even fought off a tear because I was so happy for him.  Afterall, there's no crying in hockey.

With every passing practice and game, he learns a little bit more about the game and his role in it.  He knows his teams record with every passing game, but that's about it.  Just like any other young one, he lives for the moment.  Alex has a blast on the ice, then when the game is over, he looks forward to his next venture.

Hockey is very demanding on a family, so we all share in this happy moment.  My wife (Jana) normally has the task of getting Alex to practice twice a week because I'm working.  That means my other children, Andrew and Annika must play the waiting game.  They go along and watch while Alex skates.  Then there's the 1 or 2 games on weekends, that start at 7 or 8 in the morning.  It's a tremendous sacrifice for the entire family and whenever we ask ourselves if this is all worth it, we remember "Little Gretzky" and his first career goal.  We're also hoping there's more where the first one came from.