You are here: Home / Politics / Govt / Fitzgerald: State of the State is a state of denial 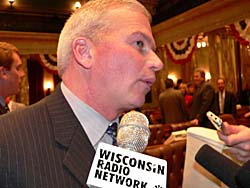 The Senate Minority Leader says Governor Jim Doyle is living in a state of denial, not the state of Wisconsin. State Senator Scott Fitzgerald (R-Juneau) says Wisconsin can't afford many of the programs outlined in the Governor's State of the State Address, in light of a projected $1.6 billion budget deficit. The Juneau Republican says many of the programs already in place aren't getting the funding they need.

The Governor has proposed ways to fund some of his initiatives, such as a $1.25 a pack increase for cigarettes. But Fitzgerald says even those plans will face resistance in the legislature, possibly from members of the Democratic caucus. Fitzgerald says the Governor must explain clearly how he plans to pay for any of his new initiatives.