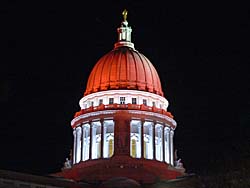 Motorists, passersby and general onlookers were "seeing red" at the state capital.

Kresha Ruvalcaba of the American Heart Association says it was to be in good company as the Empire State Building, the Sears Tower and Seattle's Space Needle were also scheduled to be lit in red on Valentines Day. "On Valentine's Day people tend to think about people who are close to their heart, so it's a good time to think about your heart."

Ruvalcaba says heart disease is the number one killer of woman — and that means our mothers, wives, daughters, sisters and friends. She says women seem to understand that but don't do anything about it. "I think what tends to happen with women, is women are kind of natural caregivers. So they tend to think about others and not necessarily think about the impact of their own health on the people they care about."

And that's why the Capital and other landmarks around the country went Red for Women as a reminder to take care of your heart.