You are here: Home / Business / Dems to demand equal pay 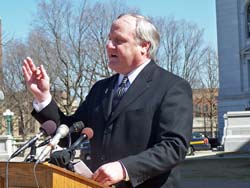 Democrats plan another push for pay equity in Wisconsin. Lynn Clousing with the Wisconsin Federation of Business and Professional Women said they've been lobbying on the issue of equal pay for the past six years. According to some sources, women on average make 75 percent of what men make in Wisconsin. Green Bay Democrat, Dave Hansen is sponsoring the 2007 version of the Equal Pay Bill in the state Senate. “People deserve to be fairly compensated for putting in a hard day's work,” said Hansen. Passage in the Democrat controlled Senate is virtually assured, but the Assembly will be more of a challenge. Milwaukee Democrat, Representative Christine Sinicki , believes the bill will pass there — if it's allowed to have a committee hearing. She called for pressure on GOP Representative Mark Honadel , who chairs the Assembly Labor Committee. “He needs to hear the message that, with only a three seat majority in the Assembly, he can't afford to ignore the request to hold a public hearing, and a vote on this very important bill.”