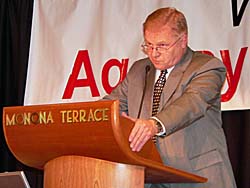 Farmers get their chance to lobby lawmakers.

Ag Day at the Capitol calls attention to, among other things, healthcare, renewable energy, Ag in the classroom, and the Right to Farm Law. Ag Secretary Rod Nilsestuen says bipartisan leadership in both houses over the past couple of years have gotten a lot done for agriculture in our state.

"I know I'm preaching to the choir here, but you know this is — food and agriculture — is a $51-billion industry in Wisconsin. It's a cornerstone that needs to be taken as central to our economy."

"Our ag exports have increased by … steadily each year … six-percent in the past year to 1.4-billion in this past year. Our total exports are up 60%."

Nilsestuen says affordable, accessible healthcare is mentioned by farmers more than almost anything else. He says marketing, biofuels, grains and all the other stuff doesn't matter without good healthcare. He says the high cost of healthcare just undercuts everything else that's being done for agriculture. Nilsestuen says if agriculture is the backbone of this state, healthcare for farmers needs to be taken very seriously.