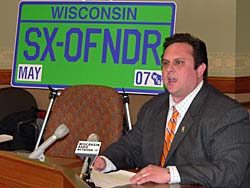 The Green License Plate bill for child sex predators gets a hearing at the state capitol.

Representative Joel Kleefisch (R-Oconomowoc) testifies to the Committee of Criminal Justice about his bill that would more easily identify sexual predators in public. He decided it would be best to tie this bill together with the GPS tracking law for child sex predators.

"So the bill that I'm proposing would require a bright green license plate to be utilized by anyone who is being tracked on the GPS tracking system which takes effect July 1st."

Kleefisch says if such an individual refuses to drive a car with the specialty plate, they face more prison time or a huge fine. Democrat Representative Fred Kessler (D-Milwaukee) questions whether this "scarlet license plate law" has been proven to work any where else or has any potential for working as a deterrent. Kleefisch says the bill is about giving the public and police another tool in understanding who might be a potential danger.

Meanwhile, Carson Frazier with the Division of Motor Vehicles testifies that her agency would have significant startup costs, including a one-time cost of $86,300, the bill would restrict them to a specific color and design of the plate and they would have to make a variety of sizes for different vehicles. (AB-226)

If such a sex predator would be pulled over for a traffic violation while driving another car not displaying the specialty plate, Kleefisch says they face going back to prison for six years or a fine of ten-thousand dollars. If they refuse to put the plate on their car, they can be fined up to $25,000 or sentenced up to ten years in prison.