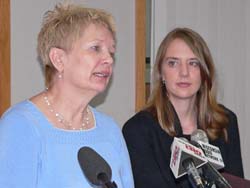 The Consumer Protection Department warns consumers that purse snatchers or online thieves aren't the only ones who could steal your identity.

Trusted companies which have your personal information could be a data source for criminals. A young Middleton woman learned a year ago she was a victim of identity theft, shortly after DiscoverCard sent her a letter, asking questions about an application.

“So I followed up and learned that somebody had attempted to open up a credit card account with Discover in my name.”

27-year-old Abbey Thompson eventually found a Colorado connection. The alleged I.D. thief, 23-year-old Tessa Green, was working for a national company called Sykes Enterprise, and she had access to company files at her place of employment, containing customers' personal information. Thompson says, before her I.D. was stolen, she believed purse snatchers were the main threat, not trusted businesses.

“Nothing of mine was stolen so it was like, 'How did this all happen?' It was really a pretty scary feeling, kind of panicky. Sort of helpless, too, you know. What can I even do about this?”

Thompson says she put a fraud alert on her name, and took other proactive measures. She says Green, and perhaps others, have her social security number, date of birth and mother's maiden name, so she had to get an extra level of security.

“So one thing I did was call right away and got extra pass codes, security levels on all accounts that exist in my name that I knew of. You know, bank accounts, cell phones, Internet, everything that I have in my name just to make sure.”

She also contacted the Office of Privacy Protection , within the state Consumer Protection Department, and obtained a full credit report to check for suspicious activity, which she encourages everyone to do on a regular basis. Tessa Green is charged with five felonies.