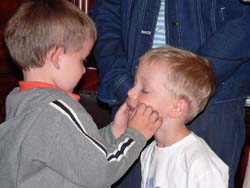 Lawmakers and advocates want to make sure autistic kids get the treatment they need. Senate Majority Leader Judy Robson 's legislation (SB-178) requires health insurance plans to cover the cost of treatment for autism, asperger syndrome and other such disorders. Robson cites a recent C.D.C. survey, which found an increasing prevalence of autism in this country. "One in 150 children have autism, and in Wisconsin this rate may be slightly lower, at one in 192, but that still makes it a very serious condition."

Robson, who is a registered nurse, says parents shouldn't have to jump hurdles to make sure their kids get the services and treatment they need. She says kids with autism who receive early intervention and treatment have a higher rate of successful outcomes. Just because a family can't afford care, Robson says, the child should not be left to suffer. "Research has shown that intensive behavioral treatment programs that are begun when children are toddlers have a strong success rate, a 50% success rate."

Robson says this is a win-win-win legislation. She explains early intervention is effective, it diminishes the waiting list, and saves taxpayer dollars in the long-run. For every dollar spent on intensive behavioral treatments for the autistic child, the state would save 19-dollars on longterm costs. 49 legislators from both sides of the isle are cosponsoring this legislation. "It's not a Republican bill, it's not a Democrat bill. This is a people bill and a children's bill."

Robson noted that several other states, including Indiana, Kentucky, and Georgia already require insurance coverage for autism treatment. Governor Jim Doyle had included a similar requirement in his budget plan, but it was removed by the Joint Finance Committee.