You are here: Home / Packers / Favre not happy missing out on Moss 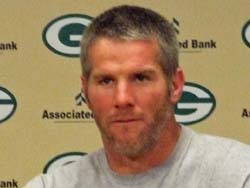 According to an article in this morning's (Sunday) Green Bay Press Gazette , 3-time MVP quarterback Brett Favre isn't happy that the Packers missed out on a chance to trade for wide receiver Randy Moss.  Instead, Moss was swept up in a draft day trade by the New England Patriots.

Favre's comments came at his annual charity golf outing down in Mississippi and he's clearly not happy.  In fact, Favre said, "There are times when I wonder if I'm the odd man out here, and they just don't know how to tell me.  This is a first-class organization that wants to win.  I want to win now."

Favre said the Packers could have had Moss, and that Moss was willing to re-do his current contract, negotiating down to a guaranteed $3-million for the upcoming season.  But the Packers reportedly thought the guaranteed deal and a reported fourth round draft pick was to stiff a price to pay.

The story says Favre even offered to give up a portion of his salary to help give Moss the guaranteed dollars, but the Packers weren't buying it.

With the team's mandatory mini-camp coming up this week, Favre won't be ready to practice because of his off-season ankle surgery.  Now, it'll be interesting to see if Favre shows up at all.

Favre wants to win now.  He knows he won't be playing much longer and would like the organization to do something to improve an offense that finished in the lower third of the league last season.  But Ted Thompson and the Packers appear content to rebuild through draft picks, despite the fact that Favre won't be around much longer.

Are the Packers missing out on a chance to take advantage of the 1 or 2 productive years remaining for Favre?  As it stands right now, it kind of looks that way!